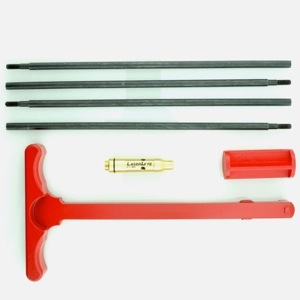 Laserlyte just sent over their new AR trainer system “Training Tyme AR LT-C556” and I’m very excited because of all the guns in my house, my AR is the one with which I need the most practice. I like this kit a little more than others I’ve tried, because there is no blue gun involved, and while that will mean a lot of extra racking of the charging handle, I will be able to practice with a real trigger and my own sights.

I figured thier would have to use of the charging handle since no live fire or blowback will be involved in use of this trainer. However, the oversized charging handle that is included with this kit, was a little surprising when I first opened the box. I mean, the thing is huge! Also surprising was the buffer block. This small round plug goes behind the buffer spring in the stock and makes the pull of the charging handle super short and quick. I am certianly not looking forward to removing and replacing my buffer spring repeatedly. It is often a nail breaking experience! The block does create a nice safety aspect though. Because the bolt moves back less than normal, there is no way for a live round to be lifted from the magazine and chambered while the buffer block is in place.

I will be watching the plastic pad on the back of the cartridge carefully. In the past I used Laserlyte’s 9mm training cartridge and found that the black plastic, that was intended to be hit by the firing pin, retained an imprint after some use and caused problems. I was told that the type of polymer used by Laserlyte was changed, so I will have to test and inspect this carefully. As usual, the battery life of the cartridge will also be in question, since even when not in use, the tiny batteries of the laser seem to run dead very quickly.

Lastly, while the inclosed “push rod”, for removal of the cartridge, makes me cringe, I will carefully use it as intended. Putting any device backwards into the barrel of my guns, automatically makes me nervous. I’ll let you know how it all shakes out.