You should go see Lone Survivor. If you haven’t, drop your plans for tonight and make it happen. 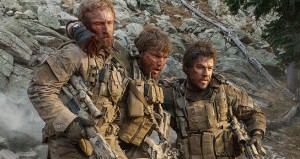 Our culture doesn’t have a tradition of storytellers that pass on tales of heroes to children and future generations. Instead, we have movies and television. Just as the great storytellers of ancient ages added embellishment and drama to the feats of Leonidas and the 300, Alexander the Great, King David and other great warriors; so now our storytellers tell the tales of great men through television and film. Band of Brothers showed a generation a look at World War 2 unlike any other, and it created legends out of the men of Easy Company. Their legend and the show only added to the knowledge of what so many Americans sacrificed during World War 2.

Lone Survivor does much the same thing. It creates legends of men that were already heroes, and in so doing ads to the stories of the thousands of brave Americans that have served in Afghanistan and Iraq. The storytellers of old created legends so that their people, their families and friends might have heroes, and in those stories the heroes would be granted a measure of immortality.

Go so see Lone Survivor. Not because it’s a good war movie, or because the gun handling is great. Go see Lone Survivor so that those stories, those men, and their legend can be granted that same small measure of immortality.