I’m addicted to lightweight boots. Last year at the Crimson Trace Midnight 3-Gun, I was wearing my usual boot of choice, the Nike Special Field boot. At the M3GI, I had the chance to meet the cool people from Danner, an Oregon based boot company that’s been in the business for over 100 years. Danner makes a lightweight boot with a similar design ethos to the SFB – the Danner boot is called the Tachyon. I was sent a pair of Sage Green Tachyons for T&E. To really evaluate the boots I wanted to wear them like I’d wear a trail running shoe. 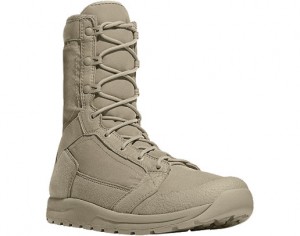 The first event I wore the Danners to was a September pheasant hunt in South Dakota. Despite stepping in several deep puddles in “warm” weather boots, my feet stayed nice and dry through the day. Because the boots hadn’t been properly broken in yet, I had some minor blistering, but nothing painful despite a solid 8 hours of trekking through dense cover shooting pheasants.

Up next was a total change in pace for the Danners, wearing them to the Inaugural IDPA BUG Nationals. Worn entirely on concrete floors, the Danners provided good traction for few stages that involved movement on what can be a dangerously slick surface. I wore the Danners for the better part of a week, and because they’d been broken in, had no issues with them.

After the BUG Match, I started wearing the Danners more and more as a regular shoe. They were comfortable, and in South Dakota during the winter had plenty of grip if the sidewalks weren’t salted as well as they should have been. The high-point for the Danners was when I wore them while filming a segment for Run2Gun TV, which involved doing burpees in four inches of snow. My feet stayed nice and dry during the filming. The same can’t be said for other parts of me, but at least my feet were dry.

The final test for the Danners came at the ultimate evaluation of shoe comfort: SHOT Show 2014. I wore my Danner Tachyon boots for the entirety of SHOT, starting on Monday at Media Day and all the way until I packed them up on Saturday to fly home. I logged an estimated 50 miles in the Danners over the course of SHOT, and my feet felt great. The same can’t be said for the editor of GunUp the Magazine, who ended up with a sprained ankle and badly injured feet. Next year she’ll wear Danners, I’ll bet.

If I had to find one negative thing to say about the Danner boots, it’s that they only offer them in a high-rise. My SFB are a mid-rise, and look like a high-top basketball shoe. They’re a little more covert than the Danner boots. But honestly, that’s it. The boots are great. They’re comfortable, high quality, and made in the USA. I had really grown to like my Danner Tachyon boots. If you’re looking for a lightweight boot that you can wear every day, I absolutely recommend the Tachyon.

And if the person who stole them out of my luggage reads this, I hope you get blisters and that the fleas of 1,000 camels infest in your armpits.