To many, the name Mikhail Kalashnikov means nothing. To quite a few other people, it is forever linked to his most famous invention, the Automat Kalashnikov model 1947, or AK-47 as it is more commonly known. 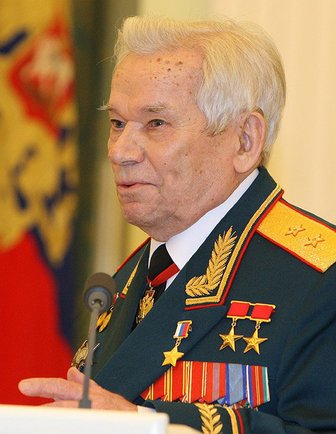 While it’s tempting to write off the man as the designer of the most famous weapon of our enemies, we feel that does him a disservice. Mr. Kalashnikov fought the Nazis during World War 2, and his combat experience was instrumental in the process that resulted in one of the greatest rifles to ever serve in a battlefield. It is just as wrong to blame Kalashnikov for how people used his invention as it would be to blame Ford for all the drunk driving that’s ever happened in their cars.

And yet it is hard to separate the legacy of the man from what his rifle came to represent. The AK-47 is part of the flag of Hezbollah, and the state of Mozambique. In the western world it’s a byword for the rifle of our enemies, starting with the Viet Cong and moving through the Cold War to today’s Global War on Terror. Yet in some countries, the AK is a symbol of freedom, and the very tool that revolutionaries used to overthrow their rulers, for better or for worse.

To view Mr. Kalashnikov and his life through the lens of western eyes lends itself toward seeing only the passing of “another communist”. While one cannot ignore the legacy of his inventions, one can look past them and see at the end, the passing of a veteran of World War 2, a man who designed a rifle to better defend his country. Mikhail Kalashnikov invented what is likely the greatest rifle of all time, and yet barely made any money from it. Perhaps then the best eulogy for him are his own words: “”I would prefer to have invented a machine that people could use and that would help farmers with their work – for example a lawnmower.”