Almost anyone who carries a gun has it: the pile of cast-off holsters, the list of guns they’ve lived and learned from, memories of bruises left by carry set ups that were just a little bit off. So how do we know when we’ve found something that works for us? 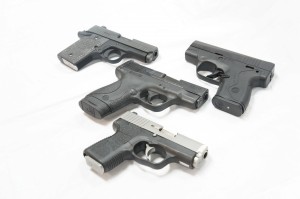 I can provide with you lists and lists of excellent carry gear: Blade-Tech Nano holsters, PHLster Skeleton holsters, the Looper Pin Up Line. I’ve used all of them, and I like all of them. So how do I, in this mess of gear that I like and recommend, tell what really works for me? It’s actually very simple. It’s the gear I actually carry.

At the end of the day, there are only a few set ups that I pick up and carry voluntarily and on a regular basis with. I like the SIG Sauer P938 in the Blade-Tech Nano, the Smith & Wesson M&P Shield in the Looper Ava or the PHLster Skeleton, my Kahr PM9 in a Garrett Industries Silent Thunder. If that last one stands out, which it probably should, that’s because it’s one of those carry set ups I ended up with that I didn’t expect to like, but ended up loving.

A good carry rig will be so comfortable that you won’t think twice about grabbing it to put it on, it will work with your wardrobe so you don’t have to worry about what you’re going to wear in the morning (well, at least in respect to carrying your gun), you won’t be worried about printing and won’t be obsessing about flashing your gun on accident. A good carry rig is going to differ a lot person to person, it becomes natural and easy to put on in the morning, and may not be what you expect it to be.