I get asked this question a lot from new shooters, and it’s something that’s actually worth addressing. There are a ton of legitimate reasons to get into competition shooting, and we’ll start with my favorite. 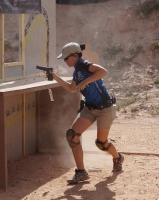 1. It’s fun
Seriously, this is the best reason I can think of to get into competition shooting. Now, here’s the thing – some sports may not be your speed. You may not find Bianchi as fun as I do, or you might prefer IDPA’s shorter courses to USPSA, but once you find one that you enjoy, keep doing it. Nevermind what jerks on the internet (myself included) say about which sport is better. Find one or two or three that you like, and go shoot and have fun. Seriously, competing in the shooting sports means you get to do stuff with a gun that someone who goes to the range once a month and shoots Teacup Hollywood Weaver for an hour at a B27.

2. You can actually learn stuff
Gunhandling skills! The average C-class competition shooter or IDPA Sharpshooter probably has better manipulation skills than 95% of “casual” gun owners. You get the repetitions and practice on reloads and gun handling through regular competition that you’d have to pay a ton of money to get via traditional training.

3. You get to meet some cool people and go interesting places
Thanks to competition shooting, I’ve had the chance to make friends that I never would have otherwise. I’ve also gotten to go some cool places (and lots of regular places as well). If you’re even halfway social, competition shooting is a great way to make friends that are guaranteed to share at least one similar interest with you: the shooting sports.

There you have it, three simple and straightforward reasons you should try competition shooting. Pick a sport: IDPA, USPSA, 3-Gun, Bianchi Cup, Steel Challenge, learn the rules, get the right gear, and go play. Remember rule 1 though: try and have a little bit of fun.