Would you like some .38 Special ammo that will shoot through a small moose? Perhaps you’re worried that your carry round won’t penetrate 35 inches of ballistic gelatin after defeating four layers of denim and a 2×4. If so, the Double-Tap .38 Special +P 158 grain lead semi-wadcutter is the round for you. 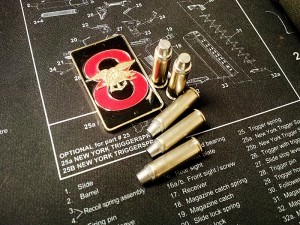 While I may joke, this is a round that offers serious penetration. After an initial batch of faulty gel produced weird numbers, some re-calibrated gel showed around 30 inches of penetration from the Double Tap load, which pushes 1000 feet per second out of a 4 inch GP100 using its Keith style SWC bullet. It actually has so much penetration that I wouldn’t hesitate to use this as a backwoods load for hiking places where there are dangerous animals that want to eat you.

It’s also a very accurate load. Out of a Ruger Security Six it shoots under 2 inches at 25 yards, and will produce similar accuracy out of my j-frame, provided a stable trigger pull. So it’s both accurate, and powerful. It’s also surprisingly shootable, despite pushing a .38 to nigh Magnum levels of velocity.

The only criticism I have of the load so far is that it managed to tie up my j-frame with fouling after about 100 rounds. It seems that rod around which the cylinder pivots was excessively fouled, leading to the gun stopping up and being unusable until heavily and thoroughly cleaned. Interestingly, that issue did not repeat itself when using the load out of a six inch revolver, which leads me to believe that unburnt powder was the culprit and not leading as I’d previously thought.

Bottom line is simple: this is an accurate, hard hitting load for your .38 Special +P guns. If you’re worried about over-penetration, don’t use it. However, if you need to shoot through something like a bear’s skull or several pieces of pine lumber and still get insane amounts of penetration, this is the round for you. I’m hoping for a break in the weather to get out and chrono it through the six inch gun, because I’m curious to see if it will make major.