Let’s take a look at two photos of groups shot by the same gun, at the same distance. The gun is a Sig P226 SAO which I recently wrote up for Combat Handguns. The first photo is of a group shot at 25 yards off a sandbag rest. 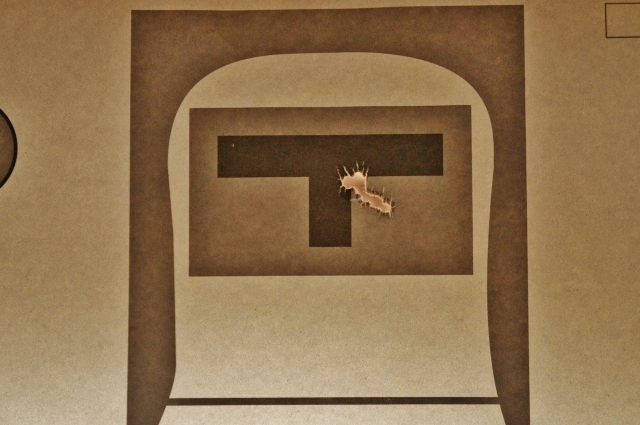 That’s about a 1 inch group, which is pretty solid at 25 yards. I like guns that will shoot under 2 inches at 25 yards with good ammo; and even my j-frame will do right around 2. Now, let’s look at the next image, which is the same gun, same ammo, same distance, but shot freestyle with no rest. 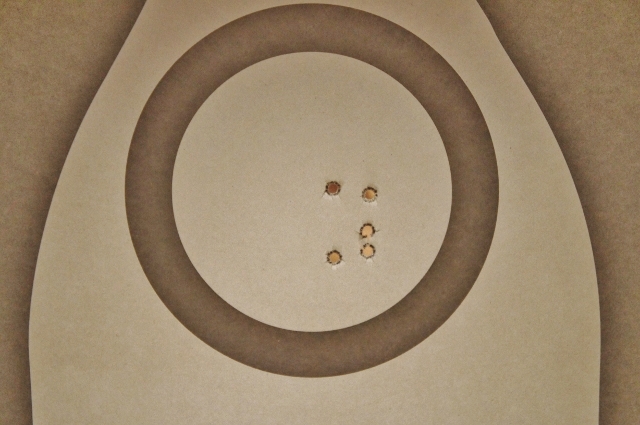 For match guns, especially Bianchi Cup or bullseye, accuracy is king. A good Cup gun should shoot around 1 inch groups at 50 yards. Bullseye guns are freak accurate. But what if you’re not interested in shooting Bianchi or bullseye, you carry a gun for self-defense and want to maybe shoot a little IDPA here and there. How important is mechanical accuracy for you? The answer is “still pretty important”, because a truly inaccurate gun could be a liability. If I recall correctly, the generally accepted standard for duty guns is 4 inch groups at 25 yards from a rest, and most guns should be able to hold that number.

One note on accuracy – I don’t bother to ransom rest guns, because for my purposes the data delivered by a ransom rest is basically useless. A sandbagged rest will tell me lots about a gun’s mechanical accuracy, and will also provide data about how I interface with its controls (grips, sights, and trigger). Then when I’m actually sighting the gun in, I’ll do that standing freestyle, because that’s how I’m going to be shooting the gun in competition. Match guns get shot from a rest to determine accuracy potential, then sighted in standing at 25 yards. All a ransom rest does is tell me how big a gun’s group is when it’s bolted into a machine that’s bolted to a table. I will say that ransom rests are good for the initial build phase of a match gun, but that’s about it.

Back to mechanical accuracy: I like accurate guns. I prefer to shoot accurate guns in competition, because it reduces the amount of error possible in a shot. But don’t get hung up on it; just because your Glock 19 can’t shoot itty bitty groups at 25 yards doesn’t mean it’s not a good carry gun. If it can keep all the rounds in an IDPA head box or better at 25 yards, it’s probably fine. If a gun shoots 4 inch groups at 25 yards, that’s better, and 2 is even better. But don’t get obsessed with chasing small group sizes at the expense of other shootability factors like sights, trigger, etc.