The most famous gun in movie history is a revolver. Clint Eastwood’s S&W Model 29 inspired of a generation of enthusiasts, and sold a ton of guns for S&W. The lines and the visuals associated with that gun are forever burned into our collective pop culture memory, to the point that when new gun owners first pick up a .44 Magnum of any type, they say “go ahead, make my day.” You can’t help it. But what about other famous wheelguns from the movies? Here’s a list of the Top 5 Movie Revolvers, starting of course with Dirty Harry.

1. The Smith & Wesson Model 29
For all the reasons mentioned above, Dirty Harry’s famous Model 29 leads the pack. People who don’t know anything about guns know that Dirty Harry carried a Model 29, and even the most gun-ignorant consumer of pop culture knows it was a .44 Magnum. 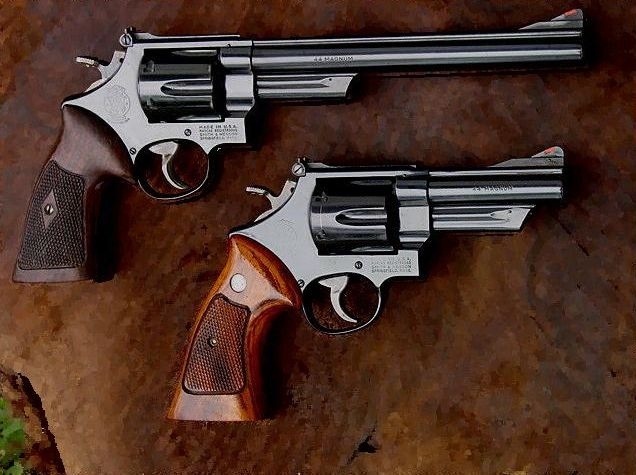 2. The Colt Single Action Army
To be fair to the Colt Single Action Army, aka the Peacemaker, it was almost number 1 on the list. You could easily make a case for it as the most famous revolver in American pop culture, due to its total dominance of the western genre. In fact, many early films used Peacemakers when it wasn’t even period correct for the characters to use them. A major reason the classic Colt isn’t number 1 is due to the decline in popularity of the western in recent years. On top of that, in recent times the propmasters of modern westerns are arming their character with a more diverse collection of period correct guns, meaning you’re just as likely to see a Schofield as you are a Colt.

The memory of Indy casually drawing his gun and putting an end to his attacker with a simple shrug will forever serve as a perfect example of why you don’t bring a knife (or a sword) to a gunfight.

4. The Webley Revolvers
Also used by Indiana Jones, the family of Webley revolvers could be compared to the Colt SAA in terms of ubiquity; but only when the film’s subject is the British Empire/Commonwealth. Most common is the .455 Mark VI, which was used by the British military from WWI all the way through the end of WWII in some quantities. It continued to soldier on in far flung locales for years after that. The .455 Mark VI’s most famous appearance is Zulu, and also appeared in Breaker Morant and 2011’s War Horse.

5. The Smith & Wesson Military & Police/Model 10
Again, an entry that needs no explanation. While modern readers likely associate M&P with the current line of S&W semi-automatic pistols, the original M&P was a .38 caliber revolver. It was eventually renamed the Model 10 to fit with S&W’s arcane model number system. It’s a K-frame revolver that was a police staple for ages, and as a result has appeared in countless movies and films.

There are your top 5 movie revolvers! What do you think should have made the list that didn’t?