When I was first introduced to competition shooting in a class, the instructor (Todd Jarrett) taught a very specific trigger manipulation technique which we’ll call “riding the reset”. Using this technique, the shooter only allows the trigger to move as far forward as necessary to reset the gun and then proceeds to fire the next shot.

Another technique for trigger manipulation is referred to, sometimes derisively as “slapping the trigger” means that your finger comes off the trigger, even just a little bit, between shots allowing the gun to go to its full mechanical reset.

Here’s the dirty little secret: both of these techniques will work just fine. The goal of your trigger pull is simple: pull the trigger to the rear without disturbing the sights. If I’m shooting a 44 ounce Tanfoglio with light recoiling .38 Super ammo, I can get away with a lot more trigger “slap” than I can if I’m shooting a Glock in .40 S&W. It’s a bit situational. When I’m shooting Glocks I tend to ride the reset, because it has a very distinct reset point. When I’m shooting 1911s, the reset travel is fairly short, so I’ll come all the way off the trigger. Revolver shooting I get off the trigger because I can actually shoot the gun quicker that way.

This isn’t a case of right and wrong regarding trigger manipulation. Both methods work, and both are going to have situationally appropriate applications. Sometimes it depends on the gun you’re using, sometime it depends on the target you’re shooting. You don’t need fine tuned trigger control to hit a 3 yard wide open IPSC target, so you can slap that thing pretty aggressively on short range squirter targets. 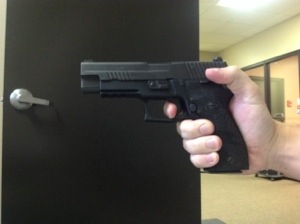 The important thing to remember about this is the goal of the trigger press as stated above should be to not disturb the sights. But we have to remember that some disturbance of the Force sights is acceptable, again depending on the target. I’m going to allow a lot more sight disturbance shooting close range IDPA targets than I am shooting Bianchi Cup. I’m going to allow more sight wobble shooting a 10 yard stage at the Cup than I am a 50 yard PPC stage. Situational trigger pulls and sight pictures are important things to learn, especially for action shooters. There will be times during an IDPA stage where you’ll want to change the amount of front sight focus and trigger manipulation from target to target.

Of course, what’s really important about all of this trigger talk is that you’ll need to practice. I will say that if I had to pick one method for a beginner shooter, I’d say ride the reset. It worked well enough for me when I was starting out, and it’s something you can easily train in dry fire. It’s also more universally applicable, as you can ride the reset and get quick shots. The downside to riding the reset is that you’re more likely to get trigger freeze when you’re shooting rapid multiples on a single target. But train train train is the solution to that problem.

So whether you slap the trigger or ride the reset, the moral of the story is that you should probably spend a lot of time practicing your trigger pull. It’s one of the fundamentals of marksmanship you can never be too good at.