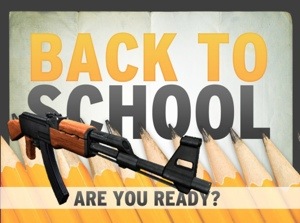 This morning the AP is reporting that yesterday “Michael Brandon Hill” fired at least six rounds at police from his “assault rifle” an AK47, while demanding that the elementary school staff members, who he was holding captive, call a local television station. As policed swarmed the school in Decatur GA, the suspect dropped to the floor and surrendered. Hill is being charged with aggravated assault of a police officer, terroristic threats and possession of a firearm by a convicted felon. The school, which has a buzz-in door system, believes that Hill must have followed an authorized person, into the building. No children were harmed yet crying parents are plastered all over the news.

Those are the facts, but here are my assumptions and opinions. Firstly, this is a convicted felon who was in possession of a firearm. How did he get it? One reasonable assumption, he didn’t fill out a 4473. The second thing that jumped out at me about this story is that this school has a good security system. They buzz through some people, but not others, and yet, Mr. Hill got through anyway. This is why preparedness training is so important. Nothing is fail-safe, and those who wish to do harm, will find a way, unless good determined people get in their way.

It seems obvious that the suspect was looking for attention and was something of a Sandy Hook copy cat. He didn’t ask for a ransom, or attempt to shoot any children or school workers. He simply asked for attention from the media. And that’s exactly what he should not recieve. The smearing of images all over the morning shows, of crying children running from their school, is deceptive and doesn’t show the reality of the story. More important, we should be asking, how did this FELON procure an AK47 (that I am relatively sure, was not “fully automatic”) and why was he not rehabilitated during his previous prison time. Also noteworthy, he was not charged with possession of a gun in a gun free zone. (*gasp* Shocking!!)