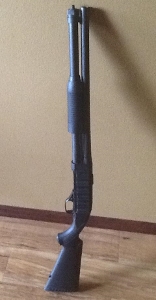 First, the observations from the match itself: basically every shotgun in our squad puked once except for my Winchester 1300 and one dude who was running some kind of Benelli. Of course, my sample isn’t scientific because many of the shotguns on the squad were heavily modified Saigas, which aren’t renowned for their reliability. That being said, the rock solid reliability of my pump made me feel happy. That reminded me of a conversation I was having with fellow gunscribe Bryce Townsley about why we still use pump guns in a military/LE role to this day. A big part of it is ammo; you can use anything in a pump from extremely low pressure target loads all the way up to thunderous turkey magnums and everything in between. As long as parts don’t break off your gun, you’ll be fine.

In many ways, the classic pump gun is like a revolver then. It’s rock solid and reliable..unless you get a parts breakage, in which case you might be reduced to prison filing your extractor on the concrete outside of your hotel room. That’s not to say that modern semi-auto shotguns aren’t reliable. The Remington VersaMax Tactical that I’ve worked with in the past was spectacularly reliable with all manner of ammo.

Perhaps it’s just the curmudgeon in me, but if I want a shotgun for serious defensive work, I’ll reach for a pump gun every time. Maybe I’m old school, maybe I’m just paranoid. I will say that watching semi-auto shotguns experience all manner of failures at the M3GI did fill me with resolve to focus any work I’m doing on the Saiga I have right now on reliability first, then gamer function.