Another 1,680 rounds have passed through Colt CCG #440. Most of that was fired in practice and the actual match for Steel Challenge, and all of it was Federal 185gr SWC. This is my round of choice for when I need to run minor PF through my Colt, despite the problems I had with getting it to run at times. As it turns out, to run the SWC well, the gun really needs to be kept clean. This is partly because it throws a lot of unburnt powder around the guts, and partly because the “weird little bullet shape” of the 185gr SWC doesn’t really promote reliable feeding. 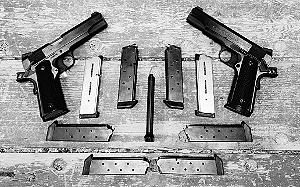 The extraction issues mentioned in report six have gone away, as it turns out it was definitely the crud that was causing the issue. During Steel Challenge and ProAm, the gun experienced one malfunction, likely due to it not being very clean at the time. That one will be counted against the gun, because it happened with a clean gun and a fresh magazine, which are circumstances that the Colt CCG has normally functioned.

Thankfully, after this week, I’m done shooting minor with a .45 for a while. Which means we’re back to shooting 230 grain FMJ and 200 grain JHP rounds. The Colt loves JHP and FMJ, and will feed those all day long. Here are the current stats: