This holiday weekend, Shelley Rae of GunUp the Magazine and I headed down to Eastern Nebraska Practical Shooters in Louisville, NE for the 2013 Great Plains Sectional match. Situated about 30 minutes outside of Omaha, the ENPS facility is one of the nicest ranges I’ve had the pleasure to shoot at in recent memory. It’s a huge facility that’s well laid out, with a good mix of large, small, and medium sized bays. 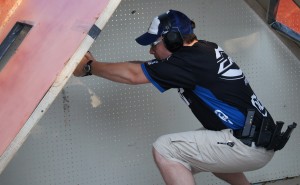 The Match
The 2013 Great Plains Sectional was a 9 stage, 225+ round count match. The average round count per stage was 25, with most stages running around 32. Stage 8 was a long, 40 round stage that created some interesting problems for shooters. The lowest round count stage was stage 1, a 16 round stage. Overall, I found the stage design to be very creative and at times downright devious. An excellent example of the creative/devious stage design would be stage 6, Guillotine. This stage started with the shooter stepping on a pressure plate that was outside the shooting area, and then having to step back in to the shooting area to begin engaging the targets. The pressure plate activated swinging hard cover in the shape of two all steel full size metric targets. Those targets provided a narrow window through which you had to engage four mini-poppers at 15-20ish yards. Not an easy shot by any margin.

The stage design at the match had me wishing that I was shooting Single Stack minor with a .38 Super instead of my .45 ACP. In Single Stack, if you score minor you’re allowed to get two more rounds in the gun. Those two rounds would have given me some considerable shooting options that just weren’t there with an 8 round gun. I did pause for a moment and reflect on what it would have been like to shoot this match with a revolver, then I banished such a thought from my mind.

Running a big match can be a struggle, however the ENPS team pulled it off very well. This was by far one of the smoothest running majors I’d ever been to. Our squad had an equipment failure on one stage that caused a little bit of a hitch, but we still finished shooting all 9 stages, including the longest classifier ever, before 4pm. Match efficiency is a big plus, because by the end of the day, we were all dragging in the Nebraska heat.

Caleb’s Match Report
Now that you know what a great match they put on at ENPS, we can talk about how I shot it. I have extremely mixed feelings about my performance yesterday, and here’s why. On the one hand, I won Single Stack. Yay! On the other hand, I did not shoot well on 5 out of the 9 stages. I made major mental or strategic errors on stages 2, 5, 6, and 8. Stage 3 I somehow left a popper standing that I had called a hit on and heard the target ring, as it turned out I had hit just at the base of the popper, less than an inch above the bottom. I was squadded with Ben Stoeger, current USPSA Production champion and someone who has really helped my shooting come along since 2010; Ben was able to sum up my match in a single sentence: “You’re pretty good at standing still and hitting stuff, but when you have to do anything else it goes to s***.” That is a fairly accurate summary of where I’m at right now with my shooting skills.

Breaking down the match, I did do some things well. I didn’t have any issues shooting swinging or turning targets, getting good hits on all of those. I was generally happy with movement, there was only one stage where I felt like I wasted a bunch of time with my footwork.

However the part that really hurt me were the mental errors at this match. The way the match was constructed meant that I had to be smart in the way I broke down stages, and more often than not I wasn’t. If I learned anything this match, it’s that you can’t shoot fast enough or accurately enough to overcome stupid stage plan. If I want to get better at the game of USPSA, I need to spend more time actually shooting USPSA and develop my stage strategy skills.

At the end, I’m happy that I won the match. A win is a win, no matter how ugly it is. I managed to shoot enough good stages to barely overcome the terrible, stupid mistakes I made and eke out a win by just 5 points. I came back with valuable lessons though about stage planning and execution. To help address those issues, I need to step up my visualization and mental training, as well as watching tape of better shooters executing stages. I’ll keep my training going with shooting and dry fire manipulations on the current pace so I can continue to develop my actual trigger pulling skills.

If you have a chance to shoot a match at the ENPS facility, I recommend you do so. It’s a great range, and they put together an excellent match. I hope that wherever the GP Sectional is in 2014, some of the stage design ethos from ENPS will carry over.