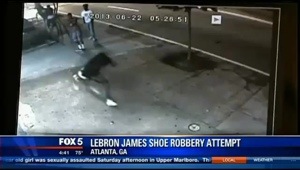 This past weekend there was a shooting in the city of Atlanta in an area called “Little 5 Points”. For that area of town, the fact that there was a shooting early on a Saturday morning, isn’t all that surprising. However the details of this particular shooting are a bit more complicated than they first appeared. When I first heard the announcement on the radio, the report was: While attempting to hold up a group of people at gun point, a robber was shot and killed by a concealed carry permit holder. The police were satisfied that this was a self defense shooting and the people who were protected by the shooter, were calling him a hero. But this was not the whole story at all.

On Saturday, before dawn, a group of twenty or more people were waiting in front of a shoe store for the release of a new basketball sneaker. The expensive shoes had been profitable for man, who the store claimed, had been pick-pocketing those on line outside the store all during the the previous week. On Saturday morning this man approached the group and attempted to rob them at gun point. A man who had been waiting on line drew his concealed weapon and the robber ran. This is when the robber was shot and killed.

This was the news report from 6 hours after the shooting:

Then the restaurant next door to the shoe store realized that they had video footage of the event and shared it with local press. Notice the robber, in black, the customer in white and the shooter in red:

In this clip the reporter claims that the man in white is the customer with the ccw. So why do we see a man in red pull the trigger? The police released a statement, after receiving the surveillance video, that stated they would take a closer look at what appeared to be a second shooter and follow up if necessary. (11alive.com)

When I saw the surveillance footage the first thing that came to mind was, the robber appears to be running away. With this in mind I began to question how, those of us who carry, must conduct ourselves in this age of constant surveillance. This shooting was a cut and dry self defense shooting, but after seeing the film, it could be reasoned that the shooter was no longer being threatened when he pulled the trigger.
• If you pulled your weapon in self defense, lined up the shot and began to squeeze the trigger, and then the threat turned and ran, what would you do?
• If there were 20 or more people standing together who were all being held at gun point and you were one of them, would you draw? Would you fire your weapon in such a crowd?