Yesterday on my facebook page I posted “If you knew you were going to get in to a gunfight, you would…” and let the readers fill in the rest. There were some amusing responses, some smart responses, and some especially tragic responses, but overall it was informative to see how people responded to a simple thought exercise. 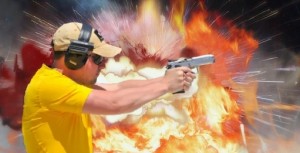 The obvious smart guy answer to “If I knew I’d be in a gunfight” is “I’d be somewhere else”, and that’s also generally the right mindset – you win 100% of the fights that never happen. But a few people took the thought exercise a little bit further, because what if you couldn’t avoid the fight? What if a loved one was in trouble, and you knew that there was no way the authorities would reach them in time? Then what do you do? A few people in the comments had obviously thought that through, and answered the question with that scenario in mind.

But the real point of the exercise was in what I left out of the statement, which is “time.” I never established a time frame for when you knew you’d be getting in a gunfight and when that gunfight actually happens. No one really caught on to that, which is fine because I was being intentionally obtuse so I could set up a blog post. The point is that you may someday know that you’re going to be in a gunfight…and two seconds later the gunfight starts. Time changes everything, it changes how we make our decisions, how we react to things going on around us, it can change our mood. Let’s remove the gunfight from it for a moment and look at the effects of time on our risk management process.

If I knew I was going to get into a bad car crash “sometime in my lifetime”, I’d make sure to always wear my seatbelt, and make sure that I drove a safe and reliable car that would give me the best chance of surviving that crash. If I knew I’d get in a car crash next week I’d take a really good hard look at my schedule and remove any unnecessary driving from that schedule to minimize my chances of getting in the crash. If I knew I was going to get in a car crash tomorrow, I’d stay home. But that’s not how it happens, and every time I’ve “known” something bad was about to happen in a car was a split second before it happened. I’ve also been in situations where I’ve been reasonably aware of my surroundings and been able to avoid accidents. Unfortunately, I’ve also been sitting in traffic minding my own business and gotten rear ended.

The point to all of this is that carrying a gun is part of a risk management strategy. We all have one, and “I choose to carry a gun” is just one part of it. I don’t go to bars, I don’t withdraw 400 bucks from an ATM at 4am, I also avoid neighborhoods where people get shot frequently. Risk management.

The point of asking “if you knew you were going to get into a gunfight” isn’t to create an opportunity for some tactical clown punching, but hopefully to get our readers (who tend to be smarter than average) to think about their personal risk management strategies.