The other day a friend of mine posted an interesting picture on Facebook. He works in the dental field and often posts pictures (non-identifying ones, consistent with medical interest) of some of the more interesting cases he deals with. Generally these serve as excellent motivation. Seeing a meth user’s teeth laying in a fetid pile does make one want to floss and brush with proper technique. On this day, however, things were different. He posted this X-ray:

Apparently a patient walked in off the street with a five-month-old gunshot wound to the face. The individual was from a foreign country where they have some problems with violent narco-trafficking and apparently he ended up on the spit list of somebody armed with a .45 ACP. The poor fellow was shot in the sinus cavity just below the right eye, presumably at close range. The hollowpoint bullet entered the sinus cavity and instead of going straight through where it would have been game over, took a fortuitous downward turn exiting through the upper gums, taking a tooth out with it. It continued into the lower jaw taking out another tooth and then took another turn, following the curve of the jaw and coming to rest as you see in the photograph. The patient reported that he was briefly knocked unconscious by the shot, but obviously the wound didn’t have the end result the would-be murderer intended if he was able to come in off the street to get a dental x-ray months later.

Believe it or not, this isn’t all that uncommon a phenomenon. People think of head shots as being instantly fatal, but if you look around you’ll find plenty of examples of people who have survived a bullet to the head…especially if the shot came from a handgun. The human skull, you see, is a magnificent structure designed to protect the bits of our anatomy that make us, us. The combination of strong, hard bones arranged with lots of complex curves (which give us the contour of our head and face) serves to help deflect impacts away from our important bits. The design is so good that our forehead can even be used as a weapon. In most combat sports you’ll notice that head-butting is against the rules. (No, the WWF isn’t a real combat sport) This is because our forehead is basically an armored plate backed up by a ~ 20 pound object and can be propelled into someone else’s anatomy with considerable force. Imagine being socked in the nose with a 20 pound bowling ball. It would certainly get your attention. 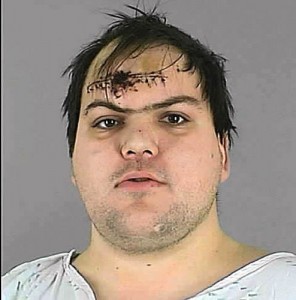 Now imagine that you’re a SWAT officer making entry on a domestic violence turned hostage situation and you see a big dumb looking so-and-so going for the gun he’s been using to threaten his wife and child. You recognize the threat and your training kicks in. You raise your MP5 from the low ready position, put the front sight on the threat’s head, and pull the trigger…probably not expecting the guy to just need a couple of stitches before he can pose for his mugshot. Jim Cirillo wrote in his book of an occasion where one of the officers on his squad fired a .38 revolver into the head of a bad guy at almost point blank range only to find that the bullet hit the skull and zipped around the curve of the scalp without doing any serious damage.

So head shots, especially from pistol calibers, aren’t always the instant kill people assume them to be…but that’s not really a concern most of the time. In self defense we’re not looking necessarily for mortality, although that may happen. We’re interested in immediately incapacitating the person who is threatening our life.

Turns out a hit to the head does a bang-up job of that. Even a superficial head wound like the one dealt to Mongo in the picture up there has an excellent chance of dropping someone at least momentarily.

Note what happens in the gunfight. In the opening moments of the fight the bad guy is hit multiple times and yet continues to fight. In the brief seconds of the fight footage you can see he’s already bleeding pretty good. While he’s using the tree for cover against the officer who is out of frame, you can see that he’s having trouble with one leg and has at least two solid wounds to the torso…but still the bad guy was standing. Then someone manages to thread a bullet through the fork of the tree, hitting the bad guy in the head. I don’t know exactly where in the head it hit the bad guy, but from the looks of things the bullet hit him in the forehead and zipped along the curve of his scalp. That causes him to drop instantly and sends the gun flying out of his hands, concluding the fireworks and leaving the bad guy to lie on the ground and ponder his life choices as he bleeds out.

I’ve discussed this issue with a number of experts ranging from the trigger-pulling side of the equation to the medical side and the general consensus is that a bullet to the grape will cause, at a minimum, a pause in the aggressive behavior of the bad guy. You can’t let your guard down because if it’s not a hit directly to the CNS the bad guy retains the physical ability to fight, but in that pause you might be able to improve your position by getting behind some cover or concealment or dealing with other threats that may be around.

A head shot is the closest thing we have to an instant off button on an act of criminal aggression. It would behoove the defense minded citizen, law enforcement officer, or member of the military to develop the skill necessary to take advantage of it. Head shots certainly aren’t always the most appropriate action in every situation, but if the situation is right and you can deliver behind the sights and the trigger you’ll either take the fight right out of the bad guy or put yourself at an extreme advantage over him.

Stuck carrying a mousegun or a J frame as your only firearm? Were I you, I’d do whatever it took to build the skill required to place a fast, accurate head shot with that weapon at relatively close range to squeeze every last bit of bad-guy stopping out of that little gun as I can. If you’ve read all the write-ups on terminal ballistics so far you’ve probably noticed a theme: Skillfully placing the bullet where it will do some good is of vastly more importance than what size the bullet actually is.

…and yet there are still guys out there who think that their .45 ACP is a death ray. When you find one, show him that x-ray.