One week, 2738 rounds. That’s how many rounds went downrange from Colt CCG #440 at the 2013 NRA Bianchi Cup. 592 of those rounds were the excellent PNW Arms 185 grain Match load which predictably ran like a fat guy to an all-you-can eat buffet ran extremely well. 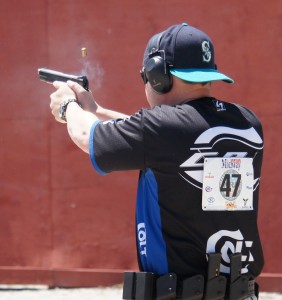 My practice ammo, Federal Gold Medal Match 185 grain semi-wadcutters had some problems out of the gate; I realized after some testing that those rounds won’t feed out of Wilson Combat Elite Tactical Magazines. They do feed just fine out of Chip McCormick Shooting Star magazines. One of those little 1911 quirks, but once that was squared away, the remaining 2000+ rounds ran without incident. Here are the stats to date:

The gun has now passed the 1:1000 reliability mark for its lifetime, and needs about 1200 more malfunction free rounds to clear the 1:2000 mark. The real lesson from this week at the Cup is to test your ammo and magazine combinations. I had been using the Wilson ETM magazines for my JHP match loads, because the ETM feeds hollow points extremely well. However, the short OAL of the 185 SWC bullet and the ETM didn’t get along, which could have really ruined my day if I’d not taken the extra time to test the rounds with new CMC magazines and document their performance. Seriously, if you have a round that you want to take to a major match, you need to test it before you get to the match. The critical area of 1911 feeding is getting the magical combo of feedramp geometry, magazine follower angle and bullet shape/OAL just right.

I am sticking with my general recommendation of the Wilson ETM as the magazine of choice for serious use, specifically because it feeds JHP ammo really well. If your 1911’s primary use is defensive, use the ETM. I’d also recommend the ETM as the go-to magazine for SWC rounds that have a standard OAL, but if you happen to be sitting on a stash of Federal Gold Medal Match SWC, your best bet is going to be either factory Colt 7 round magazines or CMC shooting star magazines.

The next interesting part of the test will be seeing how the guns run with my favorite major PF ammo, Hornady Steel Match.