Today I should have stopped shooting after my “cold” pass at the four stages. Stepping up and shooting the match cold, I shot a 1778, for the first time ever setting back to back cold PRs on the practice range. Despite having some really terrible shots on the mover, I recovered and shot a decent 450 on the plates and a 458 on the Practical. After that, things went a little rodeo. I shot a 1723 with some terrible scores, and a just sort of “meh” 1768 on my third run through. 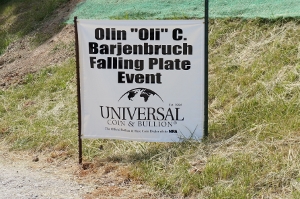 The wheels never quite came off, but they were close at times. The problem with the match is that while it’s important to get “knee deep in brass” as a part of your training, it’s also really easy to overtrain for it as well. If you’ve shot a good score and are happy with how you performed on the day, it might be a good time to pack it up and go home in a good mood. The nature of Bianchi Cup makes it a difficult match to hack your way through; so if you’re getting frustrated with your shooting on the practice range, take a break.

It wasn’t all bad though; if I’ve reached the point where a 1723 is the score I’m upset about, then I’m doing better than I was last year. If you take my best runs of the day and add them up, I would have ended up with an 1807. While that number isn’t as important to me as my cold number, it’s nice to know what’s representative of my best cumulative performance. In fact, even my worst four stages still add up to over 1700.

The real question is “what’s it going to take to crack the top 20?” Last year, 20th place shot a 1763. I know I’ve got that in me, but the question will be whether or not I can put it all together over the three days of the match to get the hits I need. So the two goals are simple: shoot a 1750 and finish in the top 20. A top 10 finish last year would require an 1840 or better, and while I’ve made a lot of improvements, I don’t think I’ve gotten that much better. But hey, who knows? 460s across the board could happen. Just watch the sights and press the trigger, right?