Today we’re continuing our look at the new IDPA rules revisions; and I want to go over a section in the “safety” portion of the rules that doesn’t actually make anyone safer, but in fact is quite dangerous. Turn your rulebooks to Chapter 2, Section S14. Once again we’ve italicized the text that I’d like to draw attention to:

When a shooter is about to run into a barricade, potentially trip or fall, or do something unsafe, the SO will physically intervene when possible, to prevent a potential accident. Because the SO kept the shooter from having a safety issue due to a shooter’s error, there is no reshoot. 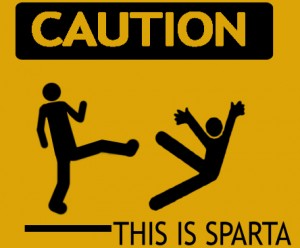 Back when I SO’d matches on the reg, only once did I have to physically contact a shooter who was about to do something unsafe; a guy was reloading and spun towards the gallery with his muzzle, and I just sort of block his arm with my forearm. To the first point, I am 100% opposed to the rulebook calling out a requirement for SOs to physically contact shooters. Let’s say for the moment that I’m the shooter, and I’m just flying, completely out of control and I’m about to break the 180. If you see that an yell “STOP” I may or may not be in enough control to actually stop my motion. At that juncture, trying to grab someone who is in the process of doing something unsafe under the influence of adrenaline AND holding a loaded gun is what we like to refer to as a “seriously bad idea.” It puts the SO in unnecessary danger and actually increases the changes of the gun making an unintentional loud noise; as it turns out, people who are all juiced on adrenaline don’t take well to being grabbed. If the SO must touch the shooter to stop them, a far better decision is to use some kind of arm block or hip check that stops the shooters motion, but doesn’t cause the grab/startle response we’re trying to avoid.

However, that’s not even my biggest concern with this ruling; rather it’s the second section about having the SO try to prevent shooters from running into barricades or trip and fall. I cannot be more clear on this issue – if a shooter is about to run into something or trip and fall, LET THEM. There is nothing you can do as an SO in the short span of time in between you realizing they’re about to do fall and them actually falling. In fact, any action an SO could take in that time frame would actually be more dangerous. I’ve fallen a number of times while shooting. Nothing bad has ever happened because my muzzle stayed downrange and my finger was off the trigger. No unintentional loud noises. Imagine now that you’re falling and everything is copacetic until suddenly the hand of the SO catches the flap of your vest, turning your mostly controlled fall into an uncontrolled spin. Suddenly your muzzle is pointed at the gallery and you’re probably getting DQ’d for something that wouldn’t have been a DQ before.

Again however, the real issue here is SO safety. We teach people to not try and catch a dropped gun. It’s dangerous, because you could get your finger in the trigger guard. That goes even more so for trying to catch a dropped shooter. Yes, it’s scary when people slip and fall, but for the most part those falls are under control, and if they’re not, DQ the shooter. But trying to psychically intervene when someone trips or falls puts the Safety Officer at great risk of being the new backstop for any NDs that may happen. I don’t know about you, but I don’t particularly want to have an ND into a Safety Officer, and I know that as a former SO I certainly don’t want to get shot in the belly because I tried to grab someone that was falling down. No thanks.