From an email from HQ:

The proposed rulebook, vetted by the IDPA Board of Directors and Legal, will be posted on IDPA.com for member review and input May 7th thru May 28th. 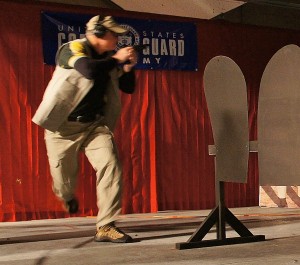 This rulebook represents a significant change for IDPA in several ways. This is the first true update of the entire rulebook since the founding of the sport. I am extremely grateful to our founders for their foresight and the strong foundation they created that has kept us on the right path for more than 16 years. This is also the first time we have utilized a member-focused approach to updates, and the indefatigable work and commitment to our sport by the members of our Tiger Teams has been incredibly gratifying. The trial run of collecting member feedback on a draft rulebook adds a lot of time and work to the process, but I believe that it will be worth the effort.
Finally, the new IDPA.com website will help us manage these and future changes.

IDPA has a tremendous advantage right now in the shooting sports, because of the explosion in concealed carry, IDPA is positioned at the wide end of the funnel to gain new members. Like the entire shooting culture at large however, they face the same challenge of recruiting and appealing to the new, younger, more urban generation of gun owners while still retaining the established older membership.

IDPA was the first “action” shooting sport that I competed in, and it still holds a special place for me because of that. With the new rulebook coming tomorrow, I’m excited to see what’s in store for the next several years of IDPA and how they’ll be leveraging the new and updated rules to continue to drive membership.