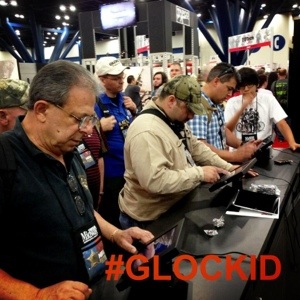 I love how the firearms industry is embracing the inter-webs. It took them long enough. At SHOTShow 2013, I was shocked to learn that there were still manufacturers without a twitter handle! Shocked! Since then, we’ve grown exponentially. Gun-folks have accepted blogs as valid sources of news and information, and I, for one, think it’s fantastic. Early in my visits to the range, I noticed that gun people are talkers. I’ve learned some of my best shooting tips and gun recommendations, just by hanging around the range. We love to share what we know, and compare our experiences and this is one of our most endearing qualities.

Along with the zillions of blogs and Facebook pages that are gun-centric, a number of sites have appeared to specifically facilitate gun chats and networking of gun people. One recent site unveiled for gun folks, is GlockID, but there are many others. Now, don’t get me wrong, I’m thrilled by manufacturers joining us in the 21st century, and I think social media can be a wonderfully powerful tool; Maybe I’m channeling my inner Alex Jones, when I worry that sites, designed specifically to gather gun people (and their information), could be a dangerous tool, eventually used against us.

I noticed a tweet of an image from this weekend’s NRA Annual meeting where Glock had lines of people signing up for their new site at iPads scattered around their booth. I’m not saying that Glock is up to no good. On the contrary, I was one of the first to sign up for Glock ID. However, if I were an anti-gun government entity, and wanted to start checking up on gun owners, I might hire a hacker and start printing Glock ID’s registration lists. Sure, not every person who registers for sites like these is guaranteed to be a gun owner, but such a list would probably be more helpful, than a collection of every 4473 from the past five years.