I don’t really talk to anti-gun people any more. I disagree with them, but to quote a favorite movie of mine “I’m not going to fight you, Ringo. There’s no money in it.” 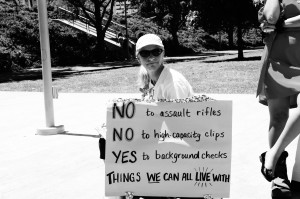 I didn’t deviate from this policy at NRA Annual Meetings, despite the fact that trolling the protesters seemed to be everyone’s favorite sport when they got tired of looking at all the awesome guns and gear in the exhibits themselves. However, I did want to head out and actually take a look at the people protesting. I wanted to hear what their words, their inflection, and see what they looked like when they were talking.

They looked angry. But not the sort of righteous anger that you see from someone opposing evil, but rather an almost childish anger of “why is no one paying attention to me?” Even after being lavished with attention from the mainstream media, you could feel the sense of indignation coming off the 10-40 people simply because no matter how much media attention they received, they simply couldn’t compete with the 90,000 people in attendance at the Annual Meetings.

To be honest, it reminded me of when I’d hire young adults in their early 20s who had been raised in one of those homes where kids aren’t spanked and their self-esteem is always being affirmed by coddling helicopter parents. When suddenly confronted with the fact that the world doesn’t think they’re special, those kids frequently sulk about. Anti-gunners, I realized, are almost exactly the same. The media plays the roll of the helicopter parent, constantly hovering over the anti-gun advocate and telling them that their ideas are good and right and special, and yet the cruel reality is that they’re losing. When confronted with losing in the Senate, with their pet President not able to enact gun control, there’s anger. You saw in the celebrity tweets immediately after the gun control bills failed in the Senate – entitled people suddenly confronted with their own irrelevancy lashing out in anger and frustration at the big mean man (usually the NRA) who took their toys away.

If it wasn’t for the fact their agenda hinges on destroying part of the Constitution, I’d almost feel bad for them. Almost.