If you visit any firearms related site often enough, sooner or later you will bear witness to a heated debate on the topic of open carry. People often feel very strongly about their position on open carry which is fine, but often those feelings on the topic are grounded more in wishful thinking than they are in reality. Let’s take a look at some myths and misconceptions surrounding open carry.

Before we get started let me get the disclaimer out of the way:

I live in a state where open carry of a firearm is perfectly legal, and I would strongly oppose any effort to outlaw open carry. In no way, shape, or form do I support/desire/long for any legal restrictions on open carry. So those who are already ginning up to send me hate mail because I don’t support the 2nd amendment or some other such foolishness can skip it. The fact that I don’t think a particular choice is always the wisest one does not mean that I’m looking to have it banned, ok?

Misconception 1: Open Carry as a Deterrent to Bad Guys

One of the most oft-cited benefits of open carry is that bad guys who see that you are armed will pass you on looking for weaker prey. In truth, the answer is, at best, maybe.

Note the comments from the woman the news channel interviewed. The man who was robbed of his firearm didn’t seem to convey an air of authority to anyone despite the pistol on his hip, and seeing as how he got robbed his situational awareness probably needed some work, too. This leads directly to the core of what’s wrong with the deterrent theory. Mere display of a firearm can certainly have an intimidation factor, but the gun itself cannot make up for the weakness of the person carrying it. I mean, how many of you out there would walk upon a scene like this and be thoroughly intimidated? 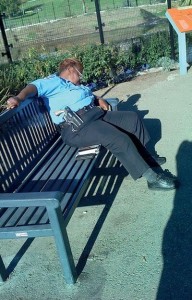 Display of a firearm cannot make up for your obvious shortcomings.

In Virginia I’ve seen lots of people openly carrying and in just about every instance where I encountered someone open carrying one dominant impression formed in my mind: Free gun. Why? Because the person who was openly carrying was almost without exception completely oblivious to what was going on around them, to the point where had I been sufficiently inclined to snatch their weapon and use it on them I could have done so with little trouble. Not because I’m a ninja, mind you, but because in the Wal-Mart checkout line when you’re task loaded with the process of buying your stuff or texting somebody it’s pitifully easy to get inside your personal space without being noticed until after I’ve snatched your pistol out of your holster with zero retention features.

Carrying openly requires a much higher level of situational awareness than concealed carry because by carrying openly you’re laying all your cards on the table up front. Anyone who approaches you knows the score from the getgo, and has probably made some important decisions about their actions before ever approaching you. This is exceedingly dangerous territory for the good guy.

Street criminals operate primarily by ambush. They typically like to use a ruse of some sort to get close, and then once they’ve closed distance and fixed you in place they’ll spring the trap, pulling the gun, an accomplice that blindsides you, etc. Apply logic here: Do you really want the guys who are looking to ambush you to have the ability to plan for the fact that you’ve got a gun?

Let me illustrate my point. Some time ago a member of the Virginia Citizen’s Defense League who was open carrying a 1911 went into the bank to transact some business. He spent his time waiting to interact with a clerk like most people do, namely looking over the details of the transaction he was about to submit to the bank. While he was busy with the transaction, a man in a ski-mask came in the door to the bank, looked around, apparently noted his weapon, and beat feet. The honest citizen carrying the 1911 had no idea any of this transpired until one of the clerks thanked him for scaring away the bad guy.

Some view that event as proof of the power of deterrence. I view it very differently. The good guy going about his day had no active hand in any of the events that transpired. The bad guy was the one making all the decisions, and was doing so with superior information. The bad guy held all the cards in that situation. That state of affairs rarely ends well for the honest citizen. Sure, in this case the bad guy decided not to risk it and it’s true that a certain percentage of criminals (generally the lower-order ones) will be scared off merely by the presence of the gun. The snag to that is that the ones who aren’t scared off by the mere display of a firearm are really not the sort of bad guy you want having the ability to factor your gun into their plan.

Often when I see display of the firearm as a deterrent championed as an approach it’s being done so as a substitute for having proper awareness of your surroundings or learning techniques for managing unknown contacts. The gun is a tool, not a talisman. It does not ward off evil all by its lonesome, and expecting it to compensate for your lack of attention or skill is a pretty stupid proposition. Deterring a low-order bad guy can be accomplished with other means that don’t require giving up your last-ditch self defense plan before you’re even aware there’s a threat.

Invariably in the conversations someone will bring up their awesome situational awareness and will insist that nobody is going to get the drop on them. I always ask that person if they’ve ever missed a turn or locked their keys in their car. You know, asking if they’re actually human…because if you’re human then I’m afraid you’re susceptible to task fixation too. Your guard cannot be on a razor’s edge the entire time you’re at Wal-Mart.

So is the deterrent factor of open carry a complete myth? No…but I believe that many completely misunderstand it and are tempted to substitute display of the pistol for awareness and actual skill. It’s also painfully obvious that many dramatically overestimate their situational awareness. I tend to be more aware than most because of experience and training, and yet I’m keenly aware that I have moments during the day when I’m completely ignorant of the outside world. Murphy’s law dictates that one of those moments is likely going to be the situation that’s bad enough to require using the gun. Since an ambush is going to involve a horrible surprise, I’d rather ensure that I’m the guy who has the most unpleasant ace imaginable up his sleeve. It’s the superior self defense strategy…