By now in our discussion of IDPA rules, we’ve look at the overarching issues, round dumping, and of course cover. Today we’ll look at the last major issue and how it ties into all three – reloads. 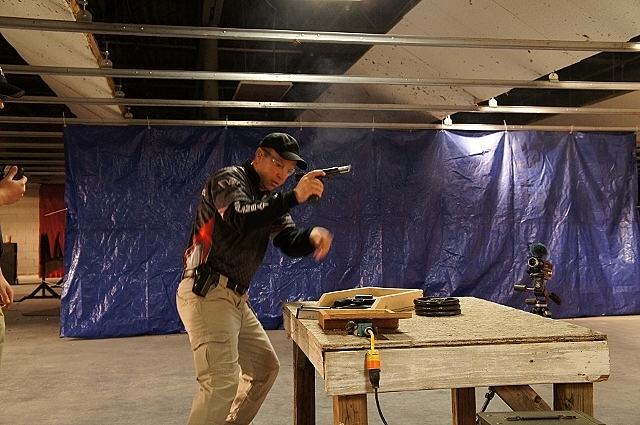 This is where reloads tie into the issue of round dumping – because it’s obviously faster to do a slide lock reload than a reload with retention, and it’s desirable to arrive at the next shooting position with a gun that’s ready to party, round dumping happens. An example of a round dumping situation for a CDP shooter: start at P1, engage two targets with two shots each, move to P2 and engage two more targets with two shots each, then move to P3 and engage all remaining targets with 2 shots each. That’s a pretty straightforward IDPA stage, and for a CDP shooter it would make perfect sense to dump an extra round on one of the targets at P1 or P2 so they can arrive at P3 with a loaded gun.

Then there’s the issue of where reloads are allowed to happen: all reloads must begin and end behind a position of cover. If you read yesterday’s post on cover, you can see why the definition of cover could then become critically important. Reloading on the move while under cover changes the name of the IDPA game; because all of a sudden you’ve made the tactical reload viable again as a stage tactic.

So how to solve reloads? Well, there are two simple solutions: 1) allow shooters to ditch an empty magazine regardless of whether or not there is a round in the chamber, or 2) allow reloads at any point on a stage. Unfortunately, I don’t think either of these are likely options, which to my mind is unfortunate. I worry very much that IDPA will simply enact a rule that specifies certain points on the stage where reloading is allowed; experience at the 2012 Indoor and Fall Nationals points me in this troubling direction.

Truth be told, fixing cover and reloads would eliminate round dumping as a problem entirely – if cover is defined as not being exposed to threat targets and shooters are allowed to ditch empty magazines with a round in the chamber, you’ve killed 3 birds with 2 stones.

Ultimately, these posts amount to nothing more than 2000 words worth of thought exercises, because at the end of the day I don’t know what IDPA is going to do. I can make an educated guess based on the direction that matches have been going, and I can speculate but none of that really matters. Personally, I have a ton of respect for Joyce Wilson and the work she’s done with IDPA, and I believe that because IDPA is at the wide end of the funnel for new shooters they have a tremendous opportunity. My hope is that they embrace that opportunity and make IDPA a force for education and bringing concealed carry/defensive minded shooters into the shooting sports.