Yesterday’s discussion of round dumping generated some healthy discussion in the comments, which is good because it’s an issue that needs to be discussed. Today, we move on to the issue that is in many ways at the heart of the struggle IDPA has with its rules: cover. 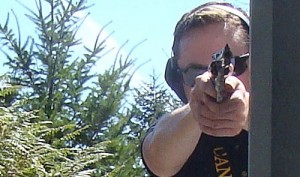 Here’s what the current IDPA rulebook has to say about cover:

Cover: 1) More than 50% of the shooter’s upper torso must be behind cover while engaging threat targets and/or reloading. For low cover, one knee must be on the ground and for vertical cover such as a wall/barricade, 100% of the shooter’s legs and feet must be behind cover.
All reloads must be executed from cover (if cover is available) and must be completed before leaving cover. A shooter is deemed loaded and may move from a position of cover ONLY when the fresh magazine is FULLY SEATED and the slide is fully forward or revolver cylinder is closed. Shooters may not move from one position of cover to another with an empty gun. Reloads must be completed from cover, however this does not mean that a shooter must duck back completely behind cover to reload before reengaging targets from a stationary firing point. The contestant may keep his eyes on his next “opponent” as long as he follows the definition of cover and does not expose too much of his body to the next threat target.

Now, the part of the definition that’s especially relevant is the “all reloads must be executed from cover”; because shooter’s desire to reload while moving from one array to the next is quite, quite strong. Here’s where things get tricky – reading the definition of cover as provided, it would SEEM to us that as long as you not exposed to a an un-engaged threat target, you are behind cover. However, that interpretation is not shared by everyone that shoots IDPA. I have seen matches where shooters have been called for violating cover because they weren’t close enough to the item providing cover, despite being 100% obscured from targets.

The 2nd issue with cover is the foot placement issue – the most common cover call is when a shooter’s foot isn’t behind cover, or is partially out of cover, and they (rightfully under the rules) get called for violating cover. Which is all well and good, except it’s frequently what the NFL refers to as a “bang-bang” play, meaning that it happens so quick it’s difficult to determine without replay what really occurred. In essence, the current “cover” rules create invisible fault lines which two different safety officers may not agree exist in the same spot.

Again, there is a simple rules fix for cover: keep the existing definition as such (100% of lower body, 50% of upper body) but add verbiage that states something along the lines of “a shooter is behind cover when 100% of their lower body and 50% of their upper body is obscured from any un-engaged threat targets, regardless of the shooter’s proximity to any physical or visual barriers.” Fixing the foot fault issue is similarly easy: allow visual fault lines. It doesn’t have to be a raised board like USPSA, but something as simple as a line of spray paint on the ground. If you’re touching the line, cover call. If you’re not, you’re good. Simple as that.

That would be how I’d “fix” cover. How do you think the upcoming rulebook will address the issue of cover calls, and their uneven nationwide enforcement?