Yesterday we took a look at some of the issues facing IDPA as they prepare to launch a new rulebook, today we’re going to take a look at one of the specific rules and how it represents more than just an issue with the rulebook but is again reflective of the cultural changes within the shooting community. 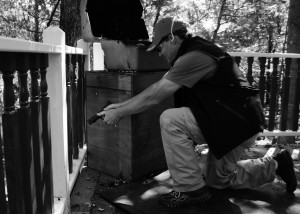 While we discussed the meta issue with IDPA’s rules (they’re vague and not consistently enforced) there are specific rules issues that we’re going to take a look at. I’ve narrowed it down to three, based on what I see the most complaints about on the IDPA Forum.

What’s interesting is that all three of those issues are linked, and so in each installment in the series you’ll see callbacks to one or another of the rules issues; because you can’t have a discussion about round dumping for example without a discussion on reloads.

So let’s talk about round dumping, but first let’s define what “round dumping” is. Round dumping is when a shooter takes an extra shot so they can do a slidelock reload at a more advantageous point in the course of fire. Since most IDPA stages require you to load your gun to 8+1 or 10+1 (for semi-autos) you’ll usually fire your 9th or 11th round as your first shot on a paper target, then have to reload in the middle of it. Round dumping would have you take a 3rd shot at a target prior to that so you can reload on the transition.

Here’s the thing about round dumping – everyone does it, and it’s impossible to enforce. Unless the Safety Officer overhears the competitor say prior to running the stage that “I’m going to take an extra shot so I can reload before moving to the next position” then calling a round dumping penalty for simply taking a 3rd shot at a target requires the SO to be a mind reader. So, round dumping has become tacitly acceptable in IDPA. Watching shooters at the 2012 Indoor and Fall Nationals, there were quite a few “make-up shots” taken on certain targets.

Now, the round dumping rule only exists because of IDPA’s rules about reloads. You must retain magazines with live cartridges in them, you can’t reload “in the open” (which ties into the cover discussion), and of course IDPA mandates that you generally have to load your gun with what adds up to an odd number of rounds. All of that adds up to an environment where you’ve created a rule that you can’t effectively enforce.

So how do you “fix” round dumping? Well, the easiest way is simply to get rid of it. Just remove the rule from the rule book, and let shooters fire however many shots they wish at whatever targets they want. That would be the simplest solution. However, there are other ways to fix round dumping as well, some of which are better than others. Another option would be to allow shooters to load either 10 or 10+1 rounds as they see fit. Let the shooter decide how they want to set their gun up for the course. Another option would be to eliminate the rule that requires you to retain an empty mag even if there’s a round in the chamber, which would essentially allow USPSA style speed reloads. I don’t see that happening either. The worst way to fix it would be to eliminate moving reloads and have all stages built with specified reload points. I’m generally opposed to any rule that takes strategic options away from the shooter, and I think that creating “static only” reload points is a perfect example of this.

Of course, there’s the underlying cultural cause of this issue – there are really two kinds of IDPA shooters right now; and they’re of very different mindsets. On the one hand, you have the IDPA Old Guard; and on the other hand you have the younger shooters that want to run and gun. The run and gun guys don’t want rules that restrict their choices when attacking a stage, and the Old Guard wants…well, to be honest I don’t know what the old guard wants. I assume they want things to stay the same. So how do you address round dumping and keep your existing members happy while attracting new, younger members?

I personally think the best solution is to eliminate the round dumping rule. Just wave it away, and the Old Guard is mostly happy because the status quo has generally been preserved, and the younger guys are happy because the worst rule in IDPA is gone and they have more freedom to shoot the course as they see fit.

How do you think IDPA will address the round dumping issue in the new rulebook?