I had an idea this morning to pop the slide off one of my Colts and throw it on the Para’s frame, because two-tone 1911s where the slide is blue and the frame is stainless look sexy. 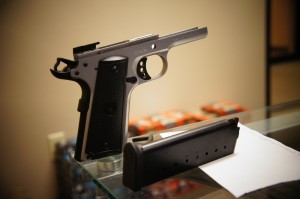 My plan is going along swimmingly and I’m already thinking about how neat the abomination I’m creating is going to look, but as I’m sliding the slide onto the frame I hear a “clunk” and the slide just stops moving. “Maybe the guide rods are different” I thought, so I pulled the Colt rod and replaced it with the Para guide rod. Clunk. “Okay, I’ll just field strip the slide and see if just the slide fits,” as I ambitiously tried again.

Clunk. “What in the sam hill is causing this?” As I lamented my plight, I noticed something about the two frames. The ejectors. The Para frame has an extended ejector, where the Colt’s is fairly short. A closer look showed that when looking at the ejectors from the front of the frame, the Para’s is also wider and shorter than the Colt ejector, so if you were to say, try and slide a Colt slide on a Para frame with a stock ejector, it wouldn’t fit.

Now, since my goal was merely to take a cool picture, I’m not upset or anything, and I’m quite frankly not surprised. One of the things that’s stuck with me since taking the 10-8 Armorer’s class is that there really isn’t such a thing as a “standard” 1911; and the closest you’re probably going to get is a Series 70 Colt. Everyone else has little variations and slight differences, so even when two guns are theoretically designed the same, like the Para and the Colt, you can’t just go swapping parts between them willy-nilly.