A young man stopped by the office yesterday to chat about guns, which is what people do when your office is in a gun shop. It’s fortunate that I really, really like chatting about guns with people who know their stuff, like this guy did. 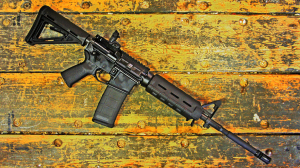 The conversation turned to rifles, and the young man mentioned he owned a Colt AR that he was thinking about selling to use the money to pick up x/y other guns. He asked my opinion, and I said “don’t sell your Colt, because tomorrow morning all those guys with crappy rifles will wake up with crappy guns, and your rifle will still be a Colt.”

Let’s talk about rifle pricing for a moment. Prices on rifles are once again starting to approach reasonable levels, and you can even find ammo again if you’re willing to pay 85 cents a round for 5.56. But the average price of a 2nd tier AR right now is still north of $800, and at that price point it just doesn’t make sense to buy one. Gear like that sort of makes sense to me when it’s $600, because then it’s just a starter rifle. You can buy it, futz around with it a little bit to decide if you even like ARs or not, and then sell it to someone else for their first rifle when you decide to upgrade.

I will say that I’ll heartily recommend a 2nd tier AR to anyone who’s thinking about going to the absolute bottom of the barrel and getting something like a Moore’s Machine Company rifle. I’ll even recommend a 2nd tier rifle if all you want is a range toy for popping cardboard or to piss off Mayor Bloomberg; because then they make sense. But for serious rifle for competition or self-defense, buy the right gun. Colt, BCM, Daniel Defense, and Smith & Wesson all make excellent factory ARs.