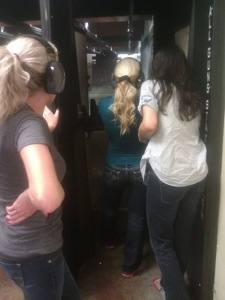 I spend plenty of time talking about newbies. They are nervous at first, get a little direction and come out of the range all excited and buzzing. We gun people, know the feeling, or, if we don’t remember our first time, we’ve seen those folks at the range. But, believe it or not, not everyone catches the bug! (I know, I was shocked too!)

My best-ee is a big tough guy, who runs a construction company. He’s never been particularly interested in guns, though he’s not anti-gun either. Over the past two years of supportively listening to my firearms talk, he’s never come to the range with me. And then, this week, while meeting a new client, he was convinced to pull the trigger.

He called me afterword, but his excitement wasn’t for the act of shooting, it was just to share his milestone, with his firearm-loving friend. Worried that someone had given him a poor introduction, I asked what he’d shot first,

“That’s an awful place to start.” I said, but he stopped me. He said that it actually had less recoil than he was expecting. (And after years of construction sights, the noise really didn’t bother him.) I asked if he was, at all, nervous, but he told me he, genuinely, was not. They had given him a clear explanation of what to do, and were standing by to help. He knew to keep the muzzle pointed in a safe direction, so why should he have cause to be nervous? Then I asked if he was interested in trying any other guns, and he said simply,

“I’ve always thought guns weren’t for me, but I’ll try anything once. Now I did it and bonded with the client at the same time, so… that’s all.”

What went wrong? Isn’t the bug automatic, as long as the newbie has a good, safe time? And then it occurred to me that maybe the joy of shooting is in some people and not in others. It is built into who we are and awakened, not caught at the range, like a disease.

But what trait makes a person, a gun-person?