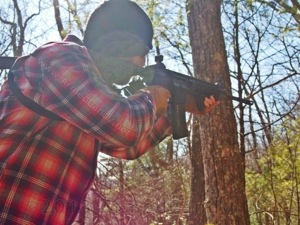 A few weekends ago, this happened:
I was driven an hour and a half into the Georgia mountains until we stopped at what seemed like a random turn off. We parked at the base of a chained driveway marked “Household trash must be in bags”. We hiked twenty minutes into the woods following a trail whose entrance was blocked by piles of branches and other natural items, intentionally placed there. We were each carrying about 30 pounds of gear, which made the barely walked trail even less navigable. At a bend in the trail just before the trail narrowed and the mountain curved up steeply, we stopped and dropped everything we were carrying.

Now, at this point in the story you might be worried that I was about to become another missing girl, on whose computer, the FBI would find very interesting internet searches. But that wasn’t my concern at all.

I was on a gun date, and I thought it was very romantic.

The other day I was watching an afternoon talk show and the guest was a woman called “The Millionaire Matchmaker”. During the part of the show reserved for audience Q&A, the woman gave some advice with which I actually agree. She said that women should allow guys to plan the date because we can learn a lot about the guy from what he plans. That sounds reasonable enough, until he knows a little about me; Then I’d hope he would consider my interests, as well as his own.

I mention my poor choice in afternoon television, because it relates to my mountain adventure. Some might feel that, as a gun industry professional, shooting would no longer be one of the activities I could enjoy on a date, but they would be wrong. (I might have a tougher time considering a date to a crowded indoor range, super romantic, but it’s still an OK back up plan.) I believe shooting can be a very romantic date. (Though I would keep it to third date, or later.) If she’s a newbie, its a great opportunity for a guy to show himself as a good, nurturing teacher. If she’s a little more knowledgeable, sharing a hobby is always a bonus to a relationship, right? As for me and my recent gun date in the woods, it suited both of us and our level of involvement in shooting. I turned off the </>gun biz part of my brain and appreciated the romance of the moment. (Though I never said I wouldn’t eventually use the whole experience for a post.)

I’m curious if anyone agrees. Are gun dates a Do, or a Don’t?