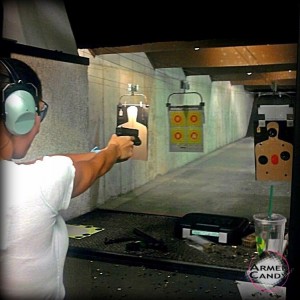 After my recent Introductory post for Gun Nuts, I was asked how I started shooting. I thought the story worthy of more than a reply to a comment.

As you know, I grew up in New York City. Back then it wasn’t so much that firearms were criminal in nature, but that they were completely nonexistent in my upbringing. In my early 20s I spent a year in Texas and was taken to my first indoor gun range. I was taught very little and only given a few rounds, but I remember doing pretty well, and catching one casing in my blouse.

It wasn’t until I had moved to Atlanta and lived here for about five years that I was invited to the range by another north easterner who had also found the hobby of firearms as an adult. We made a weekly activity of shooting until the day he couldn’t make it. I put on my big girl panties and went all by myself. I rented a little .22 LR and got down to business.

The first thing I noticed was how much longer it took to load my own magazines. .22s sure can break a few nails! Pretty soon I was a regular. My introducer, came with me some of the time. I moved on to the 9mm firearms but shot a lot less since ammo was suddenly a bit more expensive. Pretty soon I was trying lots of different guns and calibers. Fortunately my range had a huge selection of rental guns from which to chose. Other range goers were also very friendly and willing to let me try whatever was in their range bag.

Within six months I started writing my blog, ArmedCandy, as a personal diary of ALL the advice I was receiving. Everyone, wanted to share some bit of wisdom! A LOT came at me all at once, but I was surprised at the amount of people who were newbies like me and yet felt alone in the gun world. I kept going to the range, learning from anyone who would teach me, and inviting anyone who was open to it. That’s how shooting became part of my life, and I joined the gun-blogger world. The rest, as they say, is history.