Over the last couple of days, we’ve been charting an ongoing controversy with a training outfit called Hammerfour. Our involvement here at Gun Nuts started when a Facebook friend shared an imagine from their page or their reloading sequence. It was all pretty comical, a lot of flipping the gun up and herky-jerky motions to look cool. 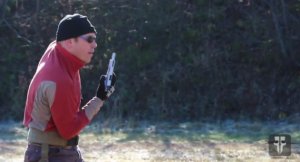 But that wasn’t the end of it, and things proceeded to get real when I stumbled across a video that had one of their instructors speed holstering a gun in the appendix position without looking at the holster at all. I called that out as dangerous and stupid (because it is) and then it just sort of exploded across the internet. When ENDO picked it up, it was pretty much game over man, game over. Hammerfour yanked the video and has been getting pounded on their Facebook page and youtube.

There are actually two related issues at work here; and we’ll take a brief look at both of them. The first issue is the lack of any sort of industry standard or regulation in the firearms industry. Literally anyone with a gun and a printer can hang out a shingle as a “firearms trainer”, and with a considerable number of veterans coming back from the wars getting into training, there are more people teaching firearms than ever before. That’s a good thing, because there’s also a huge demand for training.

The danger though is just that – anyone can be a trainer. Training, like any other consumer product needs to be marketed. The best way to market training? Take something another successful dude has already done, change it and call it your own. A really good example of this with regards to Hammerfour is the all the herky-jerky motions. It looks like someone watched the Magpul videos where they flick the gun around to look at the chamber on a rifle reload and decided it looked cool, so they’d do it for EVERYTHING. Which is fine, because hey whatever. We’re all in this to make a buck, and I don’t begrudge people that.

What does concern is the manner that many of these new training outfits respond to legitimate criticism. Note the word legitimate, because saying “your technique looks stupid and you guys are retards” isn’t legitimate criticism; that’s just being an asshole. Legitimate criticism is pointing out that there are good, established reasons taught by well respected and accomplished shooters and trainers to not do the stuff that you see some of these new outfits do. Unfortunately, the response that you frequently see is just what happened with Hammerfour – deleted videos, deleting comments, etc.

The reason that happens is specifically because anyone can be trainer – and anyone can be on the internet. Legitimate criticism gets mixed in with trolling, and everything gets deleted and no one learns anything. I can guarantee that Hammerfour isn’t going to change their training methods because of this, and they’re going to keep teaching no-look speed holstering because you should “always keep your eyes on the threat.”

My advice to any training company: learn to differentiate legitimate criticism from trolling. Keep the former, delete the latter. Remove ego from the equation. Good luck.