Yesterday I was busting the chops of some training outfit called Hammerfour for one of their videos; apparently this joint teaches that you should never ever ever take your eyes off the threat, even while you’re holstering. Anyway, if you want to chime in on that line of nonsense, the link is above. However, while perusing their site, I happened upon some images that bring up an important point about training. 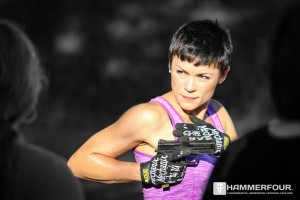 Now, I don’t want people to think I’m picking on Hammerfour or this trainer, because I’m not. As I said yesterday, I’m sure she’s a super nice person with nothing but the best of intentions. But because she’s heavily featured on the Hammerfour promo materials, she becomes a bit of a target for criticism as a result. This particular image raises the question – why is she wearing Mechanix gloves with a tank top? The contrast of “workout shirt” and “operator gloves” is so jarring that it prompted me to start thinking about making sure your training reflects the environment in which you expect to use that training.

For example: I try to make sure my practice ammo is loaded to the same power factor as my match ammo. I want to ensure that when I’m training with my practice rounds, I’m experiencing the same amount of recoil and muzzle flip that I’d get in a match. Thus, training for the environment in which I’m most likely to use a gun. Similarly, I use all the same gear. If I’m training for an IDPA match, when I’m practicing I use the same vest in practice that I plan on using at the match. If I’m working on defensive techniques, I wear street clothes like jeans and a sweater, because that’s what I wear in real life.

The environment that I expect to use my gun informs the gear I use in training. Which brings us back to the gloves, because there is something just jarring my brain around. If it’s cold, I get it – wear gloves. If you’re a cop/soldier and you wear gloves in the field, also wear gloves. This all makes sense. But for the life of me, I cannot wrap my head around why you’d wear gloves as an armed civilian doing a training course in a tank top.

Is it just me, or do you guys think there’s something odd about that?