In certain circles of the tactical training community, it’s considered cool to dismiss competition shooting because “it will get you killed in a fight”. Calling competition shooters “bullet golfers” and using phrases like “there are no timers on the streets” are de rigueur among this group of shooters. It’s really too bad, because guys like that are missing out on the many benefits competition shooting has to offer, but that’s okay. 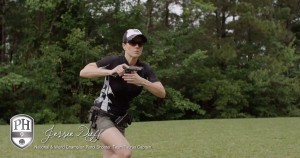 A lot of times trainers don’t shoot matches simply because it doesn’t help their business; and I totally understand and respect that decision. Shooting an IDPA or USPSA match doesn’t have very good ROI for someone who makes their living teaching shooters, so if the time spent at an IDPA match would be better spent teaching a CPL class, more power to you. Unfortunately, sometimes the decision to not shoot competition is motivated by ignorance, or worse yet contempt.

Over the next few weeks we’re going to look at some of the common misconceptions that some people in the tactical training community have about competition shooting, and generally speaking why those misconceptions are utter nonsense. Today’s article is motivated in part by an email I received in response to the post on High Speed Decision making. As I stated in the article, one of the benefits of competition shooting is that you are sometimes given the opportunity to improvise on the fly when your plan goes TU. A reader emailed me a response which paraphrased works out to this:

Oh please, in competitions you have all the time in the world to come up with a plan to shoot the stage so you know where all the bad guys are, how does that apply to self-defense?

Interestingly, I was kicking that exact topic around with a friend of mine who is a trainer and who takes competition very seriously as a skill building tool. Specifically, we were talking about the concept of pre-fight visualization. In USPSA shooting, you have a five minute walk through on each stage to figure out how best to shoot it. Obviously, you do not have that same opportunity in a self defense situation…or do you?

In the past on Gun Nuts I’ve discussed the importance of making self-defense decisions well before the fact. Sitting in your house, in the light of day and with a clear mind you have decide well before you ever pull the trigger under what circumstances you’re willing to use deadly force. Once you’ve made that decision, you have to reinforce it on a regular basis – affirming in your mind what situations, when and where you’re willing to fight. That is incredibly similar to planning a USPSA stage, because the decision tree of “I’ll shoot this target from here so I can reload going into the next position” isn’t too far from “I’ll pull my gun under circumstance x but not y.”

However, the parallel goes even further. Can you do a stage walk-through in real life? Absolutely. Take a home invasion scenario. Have you ever walked through your house in the dark with an unloaded gun? You can see the shoot angles, see where there’s cover and concealment, and learn from walking through your own home where you can best defend from. No, you can’t predict the actions of an attacker, but you can also limit their options through choke points, furniture placement, etc. When I was a kid, my parents would have us do regular fire and earthquake drills in the house, so that we all knew what to do in the event of an emergency. Home invasion drills are no different to my mind than a fire drill; it’s something that should be prepared and practiced for.

To a lesser extent, you can do this in public places as well. Obviously you can’t walk around the supermarket with your gun out looking for sight angles, but you can absolutely have a plan for places you go often. During the summer I run along the same route on a regular basis. On that route, I know where all the blind alleys and corners are, the places where hobos like to sleep, etc. Sure I can’t predict where people will be, but know the lay of the land allows me to be prepared in places where I may not have an advantage.

You can even do this in places you’ve never been, and it doesn’t take a considerable amount of effort. Going to a new restaurant? Take 2 minutes when you get in, and a couple more when you’re seated to find the exits near you. 99% of bad situations can be solved by “getting away”, and knowing where the closest exit is will help you get away.

No, you can’t predict when an attack will happen. But just like the decision to use deadly force, you should have made a plan for what you’re going to do ahead of time. People do not, generally speaking “rise to the occasion” in stressful situations. They default to the level of their training. Stage planning is a huge part of training, and a home invasion or self-defense situation is just a very high stakes stage. Make your plan now, and rehearse it in your head. Have one for tornadoes, fires, and other emergencies as well. Because that’s just good preparedness.