Last week we talked about how bullets cause wounds and how the performance of ammunition is measured…and we did so primarily so I could lay a foundation for answering this question:

“What caliber should I buy?”

Do a Google search of “9mm vs. .45?” and you get over four and a half million results. Google must be broken because I’m pretty sure I’ve seen way more than that just on one forum. When someone asks it, the descent into madness begins. All the old cliches will make an appearance as people begin to argue over roughly .10” of bullet diameter with all the reasonableness you’d expect from Sam Kinnison on a case of Red Bull. The seeker of information finds themselves bewildered by the onslaught of statements about how you need something that starts with 4, or one shot stops, or “lightning bolt” impacts, and invariably somebody will insist that what you need is a .357 magnum with 125 grain hollowpoints!! Because magnum!

The truth is relatively simple and easy to understand if you have the right information…which is the point of reading Gun Nuts, right? Last week I posted a cute little photoshop that showed up in one of the innumerable 9mm vs. .45 arguments on a forum some years ago. That shop was based on a real picture of a ballistics gel test: 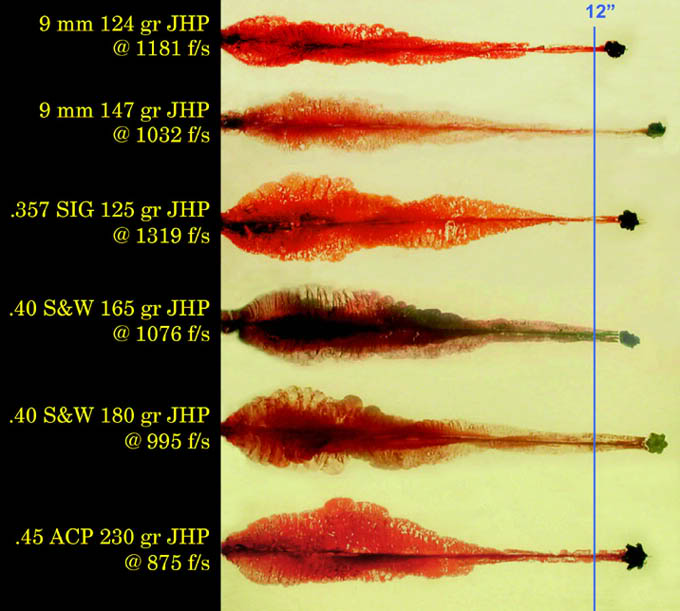 Take a nice long look at the photo above. It shows good hollowpoint loads in all the major service calibers (calibers typically used by police forces here in the United States) doing largely the same thing: Penetrating past the FBI recommended minimum of 12 inches and expanding properly. Now let’s look at another picture: 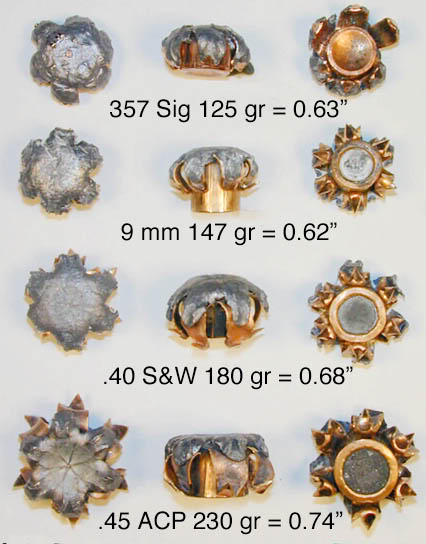 That shows us that even when the hollowpoints expand you still end up with a fairly minimal difference in the diameter of the various calibers.

So let’s put it all together: If we get about the same amount of penetration from good loads in all the service calibers and we get minimal difference in the size of the holes that they punch…and if we know that the temporary stretch cavity caused by handgun rounds isn’t a significant wounding factor for handgun shots…there really doesn’t seem to be much difference.

Exactly! There doesn’t appear to be much of a difference because there really isn’t one. When you strip away all the myth and legend and actually look at what the bullets do, you find out that handguns in service calibers offer remarkably similar performance. This is not to say that the performance of the various calibers is identical. If we throw intermediate barriers into the mix then the advantages offered by one caliber over another might make more sense. A perfect example is the need to deal with a threat inside a vehicle. If a police officer has to engage a bad guy through laminated windshield glass with a handgun, a .45 ACP using heavy JHP loads is probably going to have less deflection and might offer better performance after having gone through the barrier. In specific circumstances it’s possible to identify useful advantages of one caliber over another that might make sense for tradeoffs in capacity or weapon availability. For general defensive use, however, those specific circumstances typically aren’t common enough to make the marginal differences worth worrying about.

Currently there are police departments using all of the major service calibers with good jacketed hollowpoint ammunition and yet we don’t see a notable difference in the results they get on the street.  Departments from the NYPD to the LAPD are issuing 9mm pistols loaded with decent JHP ammo and don’t seem to have any more trouble putting bad guys down with it than the departments armed with .357 sig (which performs pretty much like 9mm as you can see in the above graphics) .40 S&W or .45 ACP. This isn’t what you’d expect to find out by listening to the internet forum arguments, but when you look at the results of scientific testing it seems like a pretty obvious result.

…but like the man once said, “Don’t confuse me with the facts!” People believe in their pet caliber despite what the results of testing and studies of actual gunshot wounds show. They really do think that if you pop a bad guy with a 9mm round that penetrates to 12 inches and expands to .63” that the bad guy will laugh it off while hitting him with a .45 ACP round that penetrates to 12 inches and expands to .74” will drop him like a stone. They’re sincere, but you can be sincere and still be completely wrong.

The bottom line on handgun terminal ballistics is this: If you’re using a reliable service caliber weapon loaded with ammunition that meets the FBI’s ballistics standards, and if you have the skill to put the bullets where they’ll do some good, then your handgun will do what you can reasonably expect a handgun to do. Despite what many would like to believe, a minor wound with a .45 ACP JHP doesn’t offer you any better odds of physically forcing the bad guy to cease his hostile actions than a minor wound with a 9mm loaded with anemic ball ammo would.

Unfortunately there are no magic bullets or calibers. There’s no particular handgun or load you can stuff into one that’s going to guarantee you that you only have to pull the trigger once to take the fight out of a bad man who means you harm.

So what caliber do you select?

The one you can afford to shoot the most. In a situation where you have to pull the trigger to preserve your life or the life of a loved one, a higher volume of training is going to prove to be of far more value than an extra .11” of bullet diameter. One of the besetting sins of the gunniverse is we often spend time talking about the things that don’t matter, glossing entirely over things that do matter. The number of folks arguing about calibers starting with 4 that couldn’t spot the warning signs of criminal assault are legion.

Don’t be that guy. Buy a good gun in a decent caliber you can afford to train with, load it with good ammo and then focus on the skills because it’s the skills that will save your life. Not your caliber.