A while back, I picked up one of the Jack Reacher novels on a whim. It was called Persuader, and it wasn’t very good. The plot wasn’t great, the writing was okay, and the gun stuff was so bad it jarred me out of the book. 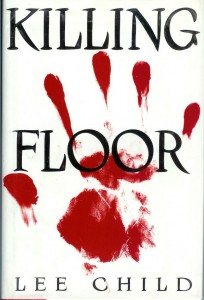 However, the Jack Reacher movie got pretty positive reviews, so I figured I’d try out another one of Lee Child’s books and went to the first book in the series, Killing Floor. For the people that just skim the posts, I’ll make this quick: it sucked. Here’s why:

In the first couple of pages of the book, which is written from the 1st person POV of Jack Reacher, a shotgun is described as throwing a “cone of death” that will “hit three or four people”. I sighed and said “that’s not how shotguns work” but got back to the book. I should have stopped right there and taken that as a sign that the rest of the book would be much the same.

It’s not often that the gun play in a book is so poorly depicted as to make enjoying the book difficult; and if Killing Floor had been better written it might not have been. But it is so poorly written with obvious “twists” telegraphed three or four chapters in advance so then when it finally happened you felt like the author was shouting “LOOK HOW CLEVER I AM”. It was just annoying.

Which brings me to the gun stuff. It wasn’t just shotguns, although those were the worst. A 10 gauge shotgun in Killing Floor is capable of firing a cone of death 20 degrees wide that will decapitate anything in its field of fire. Obviously, that’s not how shotguns work. The main character conceals and primarily uses a Desert Eagle in .44 Magnum for the majority of the novel, which predictably knocks people down because of its immense stopping power. That’s not how handguns work, either. The gunplay, and actually all the violence is written with sort of this amateurish 5th grade feeling. I feel like I was reading a child’s rendition of a fist fight, like a 5th grader writing in his notebook as the hero’s shotgun cuts a man in half.

I don’t expect the violence and gunhandling in every book to be written with the sort of OCD attention to detail that Tom Clancy, or the obvious gun-nuttery of Larry Correia. I just want it to be good enough that it doesn’t jar me out of the story. I guess I shouldn’t be surprised that a British author isn’t capable of doing that.