When someone gets interested in purchasing a handgun for the purpose of self defense, it seems that their first question is almost always about caliber selection or terminal ballistics. It’s a logical enough question to ask, but in practically every thread I’ve ever seen on the topic there are a bunch of people talking absolute nonsense on the topic of terminal ballistics. It’s not always their fault, as bad information about the behavior of bullets is all over the place and seems impossible to kill thanks to decades of accumulated myth and pseudo-scientific garbage. That being said, good information is out there on the interwebs so you don’t have to be stuck with the bad info. I’m not a terminal ballistics expert, but I have done enough looking into the matter to give you a shortcut to the stuff you need to know. 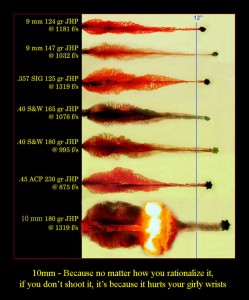 The first thing you need to understand is how projectiles actually cause wounds. Modern science tells us that there are two (and only two) wounding mechanisms – Permanent Crush Cavity and Temporary Stretch Cavity. These are relatively easy to understand. The PCC is the hole that the projectile (or multiple projectiles if the bullet fragments) punches in tissue. The TSC refers to the amount of stretch in soft tissues (pretty much anything that isn’t bone) as a result of being hit by a projectile. The faster the projectile, typically the larger the TSC.

TSC isn’t always a significant wounding factor. Tissue has sufficient elasticity to remain intact in response to some types of penetrating trauma. With firearms, typically handguns do not cause enough of a TSC to cause real damage to most soft tissue. Weapons with higher velocity projectiles like rifles, on the other hand, can cause a large TSC that surpasses soft tissue’s ability to stretch resulting in tearing of the tissue.

Secondly, you need to understand how we evaluate terminal ballistics performance. Modern ballistics testing uses specially calibrated ballistics gelatin to measure the relative performance of various loads and bullet designs in terms of the depth of penetration, the size of the permanent crush cavity, and the size of the temporary stretch cavity. The first step in measuring something is attempting to control variables, and ballistics gel tested within established protocols keeps confounding variables at bay so we can see what level of performance a particular load offers. Ballistics gelatin does not accurately replicate living tissue, but a number of studies of actual gunshot wounds in human beings and in animal testing have shown that properly calibrated ballistics gelatin serves as a useful analog for predicting likely performance in real tissue. In other words, if a particular load shows shallow penetration, a small PCC, and an insignificant TSC in ballistics gel, then the load is likely to cause minimal damage when fired into living tissue.

I want to re-emphasize that modern ballistics research is not based on what some derisively refer to as “jell-o shots”. Actual gunshot wounds sustained by human beings are studied extensively, as are wounds dealt to animals in controlled lab settings. The Department of Defense, the FBI, and numerous other state, federal, and large local law enforcement agencies have done ballistics research and to this point no one has come up with a superior analog for predicting how a given load is likely to perform in live tissue. A guy shooting chickens wrapped in duct-tape in his back yard may mean well, but he isn’t smarter than the MD’s and PHD’s who have been looking at this for years.

Various testing protocols simulate heavy clothing and intermediate barriers since both pose significant problems for bullet performance. The results gathered from these testing protocols are important, as they’ve helped inform the design of ammunition. Newer ammunition designs like Federal’s excellent HST rounds are much less likely be adversely impacted by heavy clothing or intermediate barriers than Federal’s older bullet designs like the Hydra-Shok. The Hydra-Shok is still available and apparently still sells well, but real shooting results and testing shows that the Hydra-Shok tends to clog when passing through heavy clothing, causing failures to expand. Using ballistics gel testing, the HST round was developed to deal with this problem and apparently does so quite well.

The Miami Shootout was a pivotal moment in the history of ballistics research that marks the point at which it went from a pursuit akin to alchemy into becoming an actual scientific endeavor. Today we have a better grasp on the the realities of terminal ballistics and, as a result, better ammunition performance than at any time in history. Legend, myth, and misinformation still abound, but the good information is readily available if you know where to look.

Luckily, I know a guy.