I’m a big believer in avoiding fights whenever possible. The best gunfight is one that never happens, so over the course of years of self-defense training, teaching, and personal experience I’ve developed the following theory for self-defense that will allow you to practice maximum strategically tactical threat avoidance. 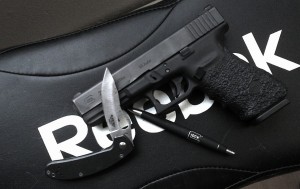 I’ve decided to call my theory the Caleb Giddings Personal Combat Safety Tactical Triad, and I’ll be releasing a DVD series soon on how to properly utilize the CGPCSTT in any non-linear operational situation. The CGPCSTT is easy to remember, and utilizes a three-step approach to maximum tactical awareness.

By following the simple guidelines of the CGPCSTT, you’ll avoid the vast majority of situations that could lead to you needing to deploy your personal weapons system in a dynamic critical incident that occurs in a disruptive environment.

Now, that may have been mostly tongue in cheek, but there’s a serious component to it as well. We spend so much time talking about what to do in a gunfight that I sometimes think we don’t spend enough time talking about how to just not get in a gunfight in the first place. I’d much rather not ever get into the fight to begin with, so as a result I really do try to avoid doing stupid things in stupid places with stupid people.

Try the CGPCSTT system sometime on your own! See how it works.