Do you have a good shotgun? Everyone seems to be casting around for some kind of evil rifle to get, and with the obvious AR15 and AK pattern choices either out of stock or hilariously overpriced, it’s time to look to other options. 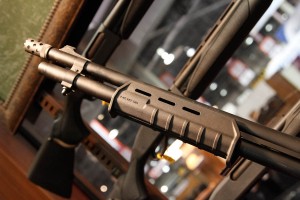 I’ve been a fan of the Remington 870 for quite some time, and there are plenty of 870s out there right now. I also just placed an order for the new FNH P-12, which appears to be a rebranded and FN-ized version of the Winchester SXP pump gun. There are still plenty of Benelli Nova pumps out there as well, and all of these guns are hitting the price point sweet spot of 400-600 bucks. For what people are selling AR15 rifles for, you could get two good pump shotguns and a boatload of ammo to train with.

Another intriguing option is to go exotic with your shotgun. The Turkish company Sarsilmaz has been making shotguns forever, and their import shotguns are available for reasonable prices. Now, I don’t have a lot of experience with the Turkish shotguns, but the reports that I’ve heard is that they tend to work. They’re not as pretty as their Italian or American counterparts, but if you’re looking for a gun to grab at 2am when the burglar alarm goes off, you probably don’t care how pretty your gun is. Again, I don’t have any personal experience with the Turk shotguns, but for $400 bucks for a semi-auto, they’re awfully tempting.

If you’re seriously looking for a firearm to defend your home and family, don’t overlook the 12 gauge shotgun. Pump or semi-auto, it’s still a serious working gun for self defense. Just because it’s not cool or sexy like an AR doesn’t make a chest full of 12 gauge buckshot any less effective at making a scumbag rethink his life choices.