Today we wrap up my review of Shivworks’ Extreme Close Quarter Concepts course with some pointers for success in the class and coverage of the most intimidating portion of the instruction: The force-on-force evolutions. 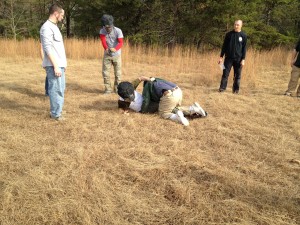 Pinned on the ground by one attacker while the other tries to shoot you with your own gun. Welcome to an ECQC force-on-force evolution.

The force-on-force exercises/evolutions (hereafter abbreviated as “evo”) are without a doubt the most intimidating part of the course. If you do some googling you can find footage on some of the popular video sites that shows you what the evolutions can be like. They look pretty violent, and in reality they are. Not so violent that people sustain any major damage, but just violent enough that you’ll feel some level of pain and probably some level of panic. I’ll admit it: when the guy jumped my poorly-executed guard, took my gun, and started shooting me in the groin it was kind of painful. When I felt the gun clear my waistband I felt the real “Oh ***CENSORED***!” fear response and adrenaline surge hit in full force. To quote one of the villagers in Team America: No me gusta!

In the evos you will face violent opposition determined to impose their will on you. The knowledge that you’re about to confront malevolent opposing will has a mental impact you have to experience to understand. You know it’s just sims. You know you’re wearing a padded helmet. You know they’re not going to kill you or do any serious damage…but your limbic system doesn’t seem to care about any of that. The amygdala response triggers and all that fight-or-flight wiring from our evolutionary past lights up like a Christmas tree. Similarly, participating in one of the evos as a “bad guy” has an impact on your mindset as well. Being the predator and knowing you probably get to ambush the other guy whenever you decide brings with it a confidence and sense of power. As a good guy, I was desperate to avoid getting pinned and shot with my own gun. As a ”bad guy” knowing that I had the advantage of deciding when it was going to go lethal, my only goal was to bring the pain.

As an observer watching others go through the evos, you see how people react under stress. When the evos are going on, eye protection is mandatory for everyone on the range. This is required not just because it’s good sense, but because Craig shared that in practically every class he gets shot while acting as an observer. Awareness of where, exactly, one’s muzzle is pointed tends to go down significantly when people are placed under the kinds of worst-case-scenario stress that the evos are designed to produce. On more than one occasion those of us acting as observers reflexively bobbed and weaved as we saw the muzzle of the blue Glock pistols heading towards us.

The same applies to the trigger finger. We saw evolutions involving very well-trained shooters that trigger-checked and kept their fingers on the trigger without even realizing it…often when scanning with the pistol in a very wide arc that swept everyone. In a class shortly before the one I attended Craig told us that he and several students watched one of the students attempt to holster a sims Glock AIWB after an evo and he accidentally discharged the weapon into his own crotch. “Booger hook off the bang switch!!!” seems so simple…and yet time and time again when we see human beings placed under stress the simple things aren’t so simple any more.

It’s not fun to find yourself on the losing end of one of the evos. It’s a real bruise to the ego to get shot in the crotch with your own gun a dozen or so times. This is, frankly, why a lot of folks avoid ECQC. It’s not a “fun” course in that you get to show up to it and spend the whole time looking awesome. The force-on-force evos are a humbler for everyone involved no matter how skilled they are. One of the most skilled people in our class absolutely dominated in his two-on-one evolution, but then in the debriefing after the evo started to see that maybe his use of force decisions were a little too aggressive…to the point of basically emptying a pistol into two bad guys who no longer posed a realistic threat.

This is another sign of sophistication on Craig’s part: The evos are not just unrestricted aggression. Once the end has been called, you then have to recount what happened and justify your actions…just as you’d have to do in a real use of force incident. Craig’s experience as a law enforcement instructor and expert witness in police use of force comes into play as he asks probing questions of the participants and observers. The student who did extremely well in the combat part of his evolution…utterly destroying the two guys who attacked him…didn’t fare so hot on the debrief when Craig explained the potential legal complications of pouring shots into a couple of guys who were on the ground and, at the time, showing absolutely no aggression.Craig made the point that on the streets of the United States, every volley of fire is essentially a separate use of force. The guy who was trying to cut your head off literally two seconds ago was a justifiable use of force…but if he’s on the ground crying for his mama or Jesus then the exigency that justifies the use of force has expired and continuing to shoot places your future in jeopardy.

Regardless of how well or poorly the students performed in the evolutions, all had to confront some things about themselves or their plans for action that needed to be changed. This is by design. I’ll quote from Craig himself:

“I teach from my heart and one thing everyone gets after an ECQC is the same exact paradigm shift that I had after my two straight years of undercover work and the significant training failures that I discuss that occurred. Everything [the student] went through, I went through real time. Except it almost cost me my life. More than once.

Once you understand that it changes your outlook forever on training. That’s the loss based perspective that REAL WINNING MINDSET is forged from. Not notional psychology and NLP [Neuro-linguistic programming] tricks.

The ShivWorks/TPI paradigm builds an adaptable, confident, robust tactician with REAL capability and an accurate sense of who they are right now and a road map of where they need to go.

Nobody ever said it was easy or you could learn it in a weekend.”

From what I’ve seen out of ECQC alumni, Craig is pretty much in the ten-ring with that assessment. ECQC is one of the most unique and, in my estimation, valuable training experiences available on the market today. Hopefully in the last few weeks I’ve adequately communicated the value I think the course presents for practically anyone interested in self defense. I’ve lavished this much time and attention on the course in hopes of relating to you just a little bit of what I took away from it. No amount of text could really do it justice…and my estimation of the course is absolutely in line with feedback I’ve solicited from multiple ECQC alumni with day jobs that range from running a small store to combat operations overseas. I’m convinced that anyone reading these words would get incredible value from taking the course themselves.

…and you’re probably thinking: “Sure, but I don’t think I’m ready for that.”

This is a very physical course, but you need not have a six-pack and a purple belt in BJJ to get something from the course. Being in shape is a huge benefit and some grappling/wrestling skill will certainly allow you to get even more out of the course, no question. If you’re new to combatives or to combatives in a weapons-based environment and you want to fix that, there’s no better shortcut to fixing whatever deficiencies you identify than by going directly to ECQC.

If you’d like to take the course but you’re not sure you are in good enough shape to do so, my best suggestion for you would be to do some Long Slow Distance training. This involves doing some sort of physical activity that gets your heart rate up between 120 and 150 beats per minute, and keeping your heart rate there for 60-90 minutes at a time a few times a week. If you’re not in shape you can do this with activity as simple as walking briskly. A good regimen of LSD training as recommended on Craig’s forum, Total Protection Interactive, will prove to be worthwhile when you’re doing the ECQC coursework and evolutions. It will even help burn off some adipose…win/win!

If you show up with decent LSD based conditioning and a good attitude, you’ll get a lot out of the course. Don’t be intimidated by the physicality of the course or the level of stress it guarantees: After all, it’s not likely to be any easier for you in a real fight. ECQC will make you more adaptable, more thoughtful, more aware of the world around you, and more aware of your own limits than just about any other course I can name. It’s an invaluable experience for the individual interested in self defense.