Had someone told me before I started the test that this Hi-Point was going to deliver some of the best accuracy I’ve seen out of a semi-automatic pistol I would have laughed in their face. If you’ll pardon me for speaking with a mouth full of crow, I have to tell you that this pistol delivered some of the best accuracy that I’ve ever personally encountered from a semi-automatic pistol in my life. My custom 1911 will best it, as will my H&K P30 or my S&W Model 10 revolver…but not by much, at least not in my hands. Whether this is a benefit common to all Hi-Points or is just a blind-squirrel level phenomena unique to this pistol I cannot say. If the manufacturer’s other offerings are even half as accurate they’d still offer “good enough” accuracy for anything you can reasonably expect a handgun to do. Will bullseye shooters the world over see this test and start using Hi-Points in competition? If they do, I will disavow any knowledge of this test, pull out my backup passport (Dirk Hapley) and move to Argentina. I’m a nice guy, but “Dirk” is a ruthless assassin for hire. You never saw anything, you never read anything, and you have no idea what a “blog” is, got it?*

The awkwardness of the controls meant that attempting to shoot the Hi-Point like I’d shoot any other semi-automatic pistol was doomed to failure. This pistol offered excellent accuracy without question, but good luck getting any of that accuracy if you were trying to shoot the pistol at speed thanks largely to the Jekyl and Hyde nature of the trigger. The magazine safety could either disappear into the background or interfere with a speed reload with all the subtlety of an 8 foot NBA center blocking a 6th grader’s layup. These are not insignificant disadvantages to what is supposed to be a lifesaving tool. When you reach for a pistol you want to know how it will perform…not hope it won’t be obnoxious.

The pistol just doesn’t seem to have been designed with the human hand in mind. It was difficult to get a serious two-handed grip on the pistol thanks to the relatively small grip panels and relatively huge slide. A good grip is the foundation of controlling the pistol and delivering bullets where you want them on demand.

The number of stoppages this pistol experienced during the test illustrates why I’ve never been big on recommending Hi-Point pistols to folks looking for a handgun. I know the internet is packed to bursting with people who claim their gun has gone however many rounds without a stoppage or malfunction, but I can’t recall ever having seen a Hi-Point at the range that didn’t exhibit some sort of issue. It’s really easy to say that one’s pistol has performed flawlessly. It’s quite another to actually keep detailed records on how the pistol has performed over a given period of service and publish them. This particular Hi-Point is a sample of one and limited sample sizes should always be treated with healthy academic skepticism, but I don’t believe my pistol is severely atypical in the reliability-from-the-box department. The frequent cleanings and lubrication necessary to keep the pistol at the peak of its reliability (such as it is) do not bode well for those who want to use a pistol like this as a “truck gun”. The idea that you can load it, stow it, and forget about it while still expecting it to function doesn’t ring true with the pistol I bought.

Handguns can be used as scarecrows and they can be pretty effective in that role, but it’s not something I would rely on. When the time comes to pull the trigger you’re pretty much down to your last option…and you really need that option to work properly.

Being able to get a decent holster (Like the excellent holster Dark Star Gear built for this test) is important if you intend to carry a pistol for personal defense. Even the greatest handgun in the world is pointless if it isn’t on you when you need it. Having to go to extraordinary lengths to get a holster that works for concealment makes the pistol that much more unsuitable for the role of a defensive handgun. 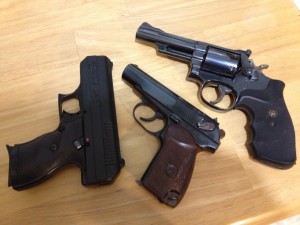 A Bulgarian Makarov and a Smith & Wesson model 19…both purchased for less than the price of the Hi-Point.
With all of those considerations stated, let’s answer the big question: Based on this test, would I voluntarily select a Hi-Point as a handgun for defensive purposes?

Only if I had absolutely no other options. When you go into a gunstore and look around, typically the Hi-Point is the least expensive option there. If I were almost broke and had to have a handgun right then, I’d buy one…but I’d make that decision because the stipulated circumstances leave that as my only option.

If we’re honest with ourselves, most people are not facing straits that desperate. I’ve personally witnessed people with a $50 dollar a week Starbucks habit talking about how they couldn’t afford to buy a Glock. Some people simply suck at setting priorities. I’d go without a smart phone if it meant I could carry a handgun I could actually shoot well and that I could expect to function reasonably. For me, a dependable pistol is a priority. This doesn’t mean I’m going to run out and spend a whole bunch of money on a handgun, though.

I’m an enthusiast and I have spent a pretty penny on handguns, but I’ve also done quite a bit of bargain shopping. In the picture you’ll note that the Hi-Point is joined by a Bulgarian Makarov and a 4” S&W model 19 revolver. They’re in the picture because I purchased both handguns for less than I paid for the Hi-Point. The Makarov I picked up at a gunshow a few years ago for $169.00. While it’s not an ideal pistol either, it is reliable and durable and relatively inexpensive to customize and buy accessories for. The model 19 I picked up off of Gunbroker for a screaming deal of $125.00.

Now I’m not saying that Gunbroker or forum equipment exchanges are littered with people unloading excellent condition S&W revolvers for $125.00. All I am saying is that someone who is on a tight budget can probably find something better for not much more money if they do their homework. The internet gives consumers more access to more options for practically any good you can name, and firearms are no exception. If you shop smart you can find bargains. One fairly reliable source is police trade-ins which often look ugly but are mechanically sound and can be had for very reasonable prices.

Overall the Hi-Point did better than I expected it to by a considerable margin. It survived more than 2,000 rounds (including over 150 +P JHP rounds) without a major failure of any critical components. The stoppages it experienced were annoying, but relatively easy to fix on the fly. When the original magazine’s follower was spontaneously puked into the action during the first range session, I expected the Hi-Point to be, as Tamara might say, a “pulsating ball of suck and fail.” Granted the expectations were pretty low to start with, but in the end it exceeded expectations and survived more rounds than most owners are likely to ever put through one.

A friend of mine who has watched much of the test noted during one of the sessions where I was frustrated with efforts to reliably put two rounds into a 3×5 card at speed that delivering one shot to that sized area on a real bad guy would probably be sufficient to make him at least reconsider his choices in life. If forced to carry a Hi-Point I could certainly do so (thanks in no small part to now having a decent holster for it from Dark Star Gear) and if someone insisted on doing me serious harm I could probably use the weapon to successfully defend myself.

…but when it comes to a situation where I’m drawing a handgun for the purposes of self defense, I don’t want “probably”.

* Of course I’m not actually foolish enough to tell you the name on my second passport.