Cruising through my BlackBerry PlayBook this morning in the Denver airport, I found one of my favorite pictures from SHOT SHOW. It’s not a good picture from a technical standpoint, but it neatly illustrates some of my pet peeves about gun related marketing. 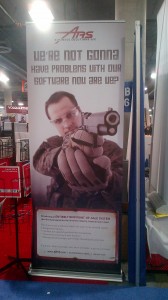 There is so much wrong with this banner that it’s difficult to know where to start, and I will apologize in advance if you designed this banner or work for the company. Just to begin with, FIX YOUR ****ING GRIP. There are few things that drive me battier than a big ol’ promo image of some dude all tac’d up holding his gun in the teacup Hollywood weaver. What that says to me is that your company doesn’t actually know anything about guns, and didn’t care enough to Google “how to hold a handgun”.

The other big WTF about this banner is the phrasing. I actually feel like the model is threatening me because he’s pointing a gun at me and asking if we’re going to have a problem. Just all kinds of fail, so what bugs you about this banner?