An excerpt from a conversation I was having yesterday resulted in me saying “I would rather have an XDm than an equivalently priced 1911.” Heresy? Perhaps. But at the same time, it’s a concept that makes sense. An XDm costs what at retail, 500 bucks for a base model? Maybe 650 for the excellent 5.25 competition model. So if you think about the amount of 1911 you can get for 400-650 bucks…well, then it starts to make sense. 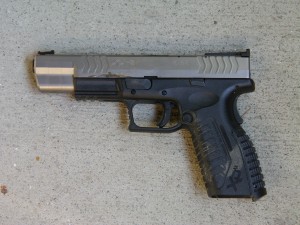 I’m not saying that an XDm is a better choice than a Glock or an M&P, but if you’re the kind if guy that thinks a 650 dollar 1911 is a good idea, then you probably have some kind of silly reason for not wanting a Glock. In all seriousness though, I’m on my 3rd XD pistol. I had a .40 S&W, an XDm 9mm and now the 5.25 model. I’ve shot the most rounds through the 5.25, but I honestly didn’t have problems with my other XD pistols.

But that’s not the point, because ultimately the point I’m trying to make is that maybe, XDm pistols don’t suck. Here’s the problem – there aren’t a lot of high profile XDm shooters out there. Rob Leatham runs one, but since he works for Springfield there is an expectation that his guns will work. Aside from Rob, can you name one high profile shooter than runs an XDm? I’d like to see more data, but my own anecdotal experience leads to me to the conclusion that an XDm is a better choice than a 1911 for a similar price.