With just a pen and a little creativity you can take any target from ordinary to extraordinary. Why spend $2.00 a piece on fancy silhouette targets when you can make your own with a cheap T2 and a marker?

One my frequent Gold Members (who all receive a free stack of T2s on arrival) chooses to customize them. Rather than buying a silhouette target and certainly not being boring enough to just shoot at a circle he turns his T2s into little silhouettes! I had a snapped a photo of his artwork but the photograph (not the customer’s drawing) was not up to the artistic standards of Gun Nuts so I have used my extensive Photoshop skills to bring you a computerized rendition of this customer’s unique targets: 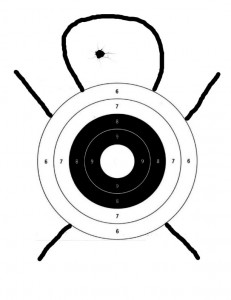 Another creative way to make your boring old round targets more fun is playing the face game! That means shooting a smiley face into your target. It’s even better if you give your smiley face a personality later! Just look at this example: 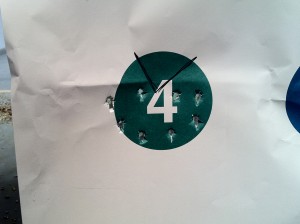 Boring old 6 dot target no longer! But what about those targets that are already shot up? Drawing pictures on them or shooting smiley faces in them just isn’t the same when they’re already covered in bullet holes. Don’t fret though, there are options available for these poor shot up targets as well! The art of origami is an old standing tradition that some people are talented enough to do with almost any piece of paper, for the rest of us there are paper airplanes (aerodynamic stability not guaranteed): 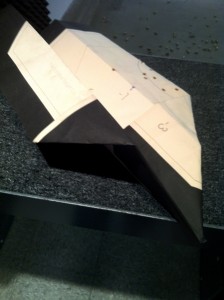 Don’t allow yourself to be bored by those plain old targets! Most importantly remember that we’re all here to learn a lot, shoot a lot and have a little fun along the way. Gun ranges shouldn’t be boring and your range membership photo shouldn’t look like a mug shot. Sometimes one small gesture is all it takes to make you, or someone else on the range, smile.