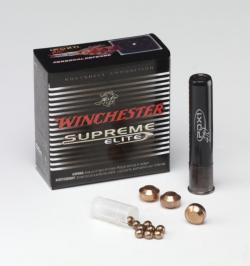 Last year around this time, Winchester introduced their new “defensive” .410 load for shotguns and the Taurus Judge.

The PDX1 round was pretty obviously designed for the Judge, as there are already decent buckshot and slug loads out there for .410 shotguns.  This round uses three “defense disks” which are backed by 12 BB-sized shot pellets.  The defense disks will actually engage the rifling on a Judge and be somewhat more accurate than the shot, which will get spun out in a circular pattern on target.

I recently had the opportunity to pattern the PDX1 ammo at 7 yards from an actual Taurus Judge.  At 7 yards, all three defense disks impacted the target center of mass in approximately a 2-3 inch spread.  The 12 BBs?  7 hit the target, 4 more hit the paper, and the 12th was a total miss.  At 7 yards.  Now, I have no doubt that if I had run the same load through a conventional shotgun, the BB group would have been acceptable, but out of the Taurus Judge even at 7 yards the shot spread is too wide to be safe for defensive use in any circumstances.   The penetration on the defense disks leaves something to be desired, as outside testing has shown they’ll only penetrate 10 inches in bare gelatin from the Judge.

I am considering testing this ammo out of a .410 shotgun – while I wouldn’t use this as defensive ammo out of a Judge, it might have some benefit out of a full size shotgun with a proper barrel.