Skip to content
It has recently become a sport at dinners after Tuesday Night Pistol League to speculate and wonder at the contents of my purse.  It seems that in the world of man what a woman holds in her purse is a subject of curiosity.  The first time I emptied my purse for the crowd they pulled out their phones and took pictures.  Yes, photos of the stuff I carry with me on a daily basis.  Who knew?

Since it appears what I carry is not only acceptable, but a laudable collection of items, let’s take a look at what it is I believe necessary for day to day life: 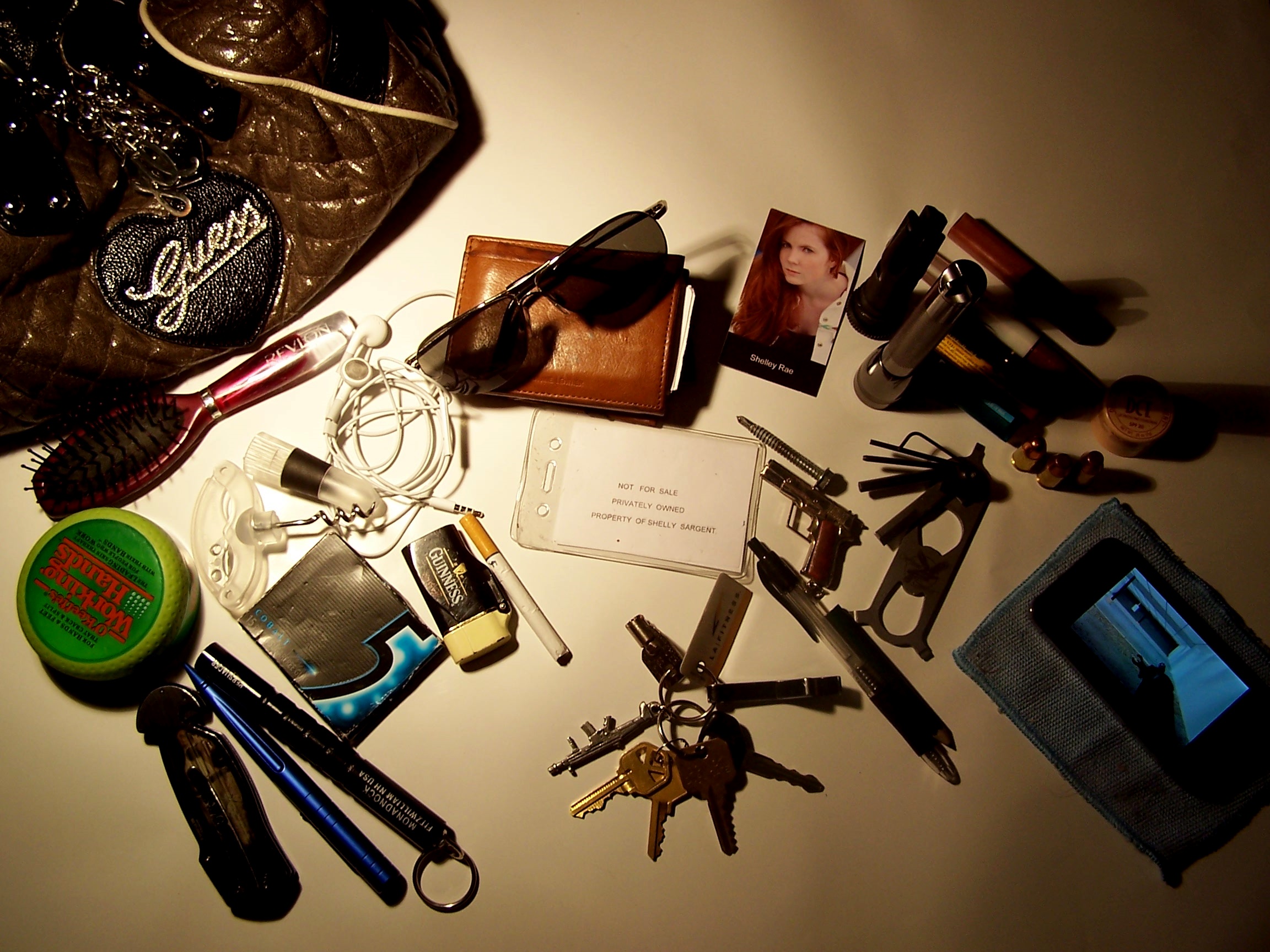 First off, let me inform you all that I have really cut back in the past few months.  My purse has shrunk in size and significantly in weight.  This means that I can break this down item by item (or at least groups of items) into an explanation of why exactly this is in my handbag. 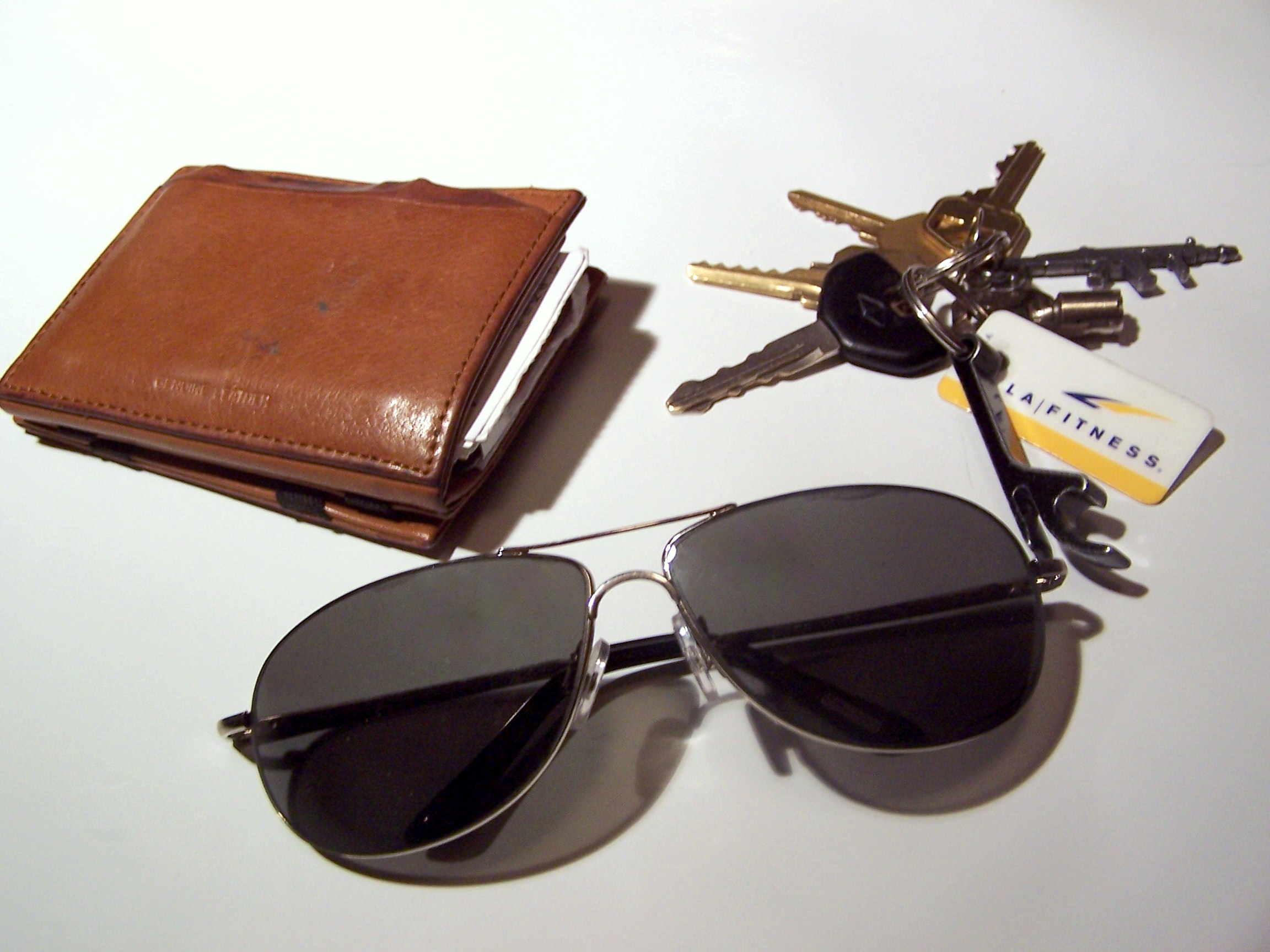 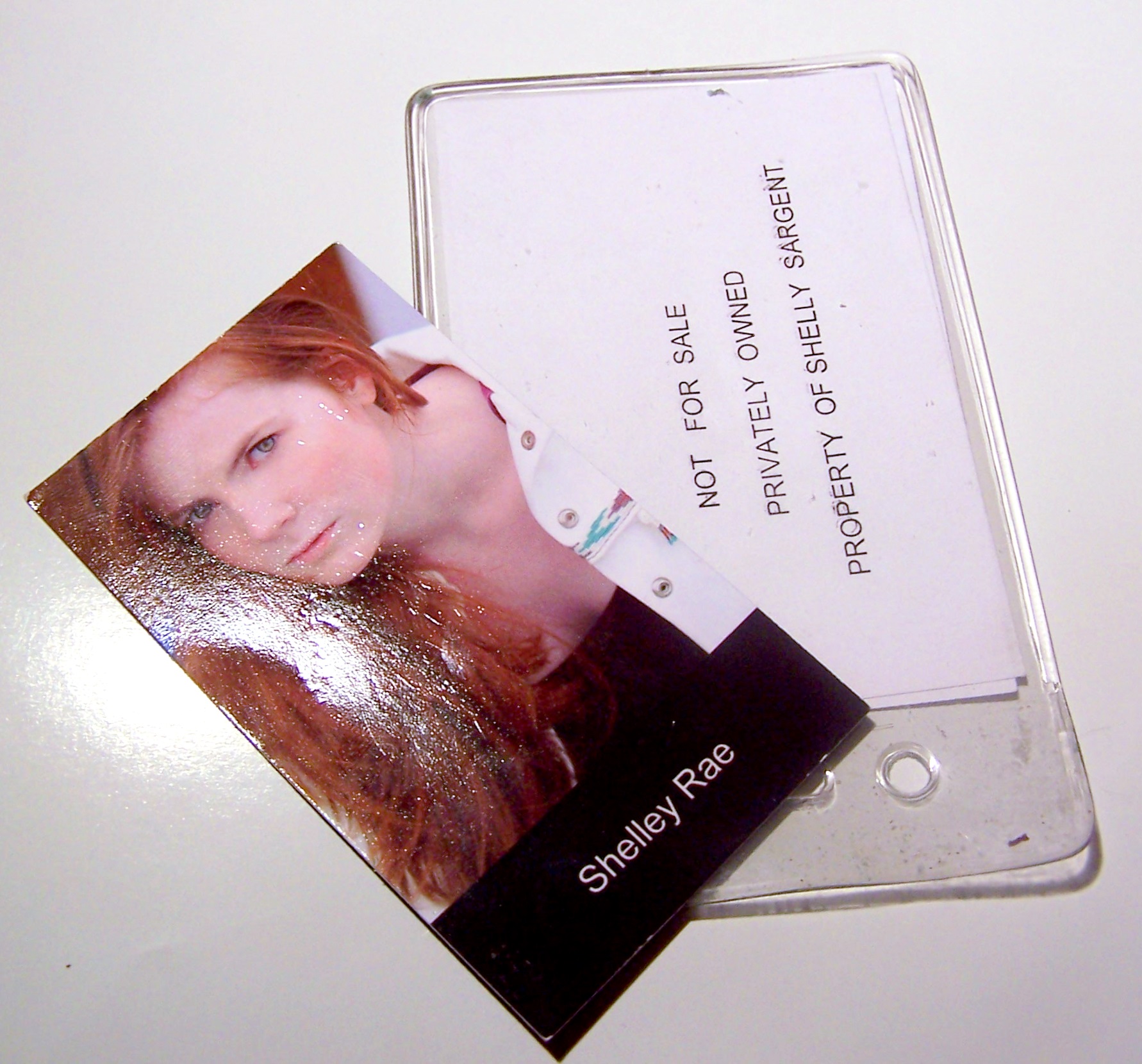 Business cards are important to have.  Since no one else I work for has given me a business card I carry around my modeling comp cards and on occasion West Coast Armory business cards and brochures. (I’m known for pulling a West Coast Armory brochure out of my purse at the bar mid-conversation: “You want to try and shoot a gun?!  I know a place!”)  Also pictured is my “ATF-Avoidance” Tag.  At my place of business we have to label all privately owned firearms or else the ATF could get mad at us, and as frustrating as they may be, it’s pertinent to keep them happy.  As a result a coworker of mine put together these handy little laminated tags that are easy to attach to gun cases so we have an easy way to keep the ATF off our backs.  This one lives in my purse, the other one lives attached to my rifle case. 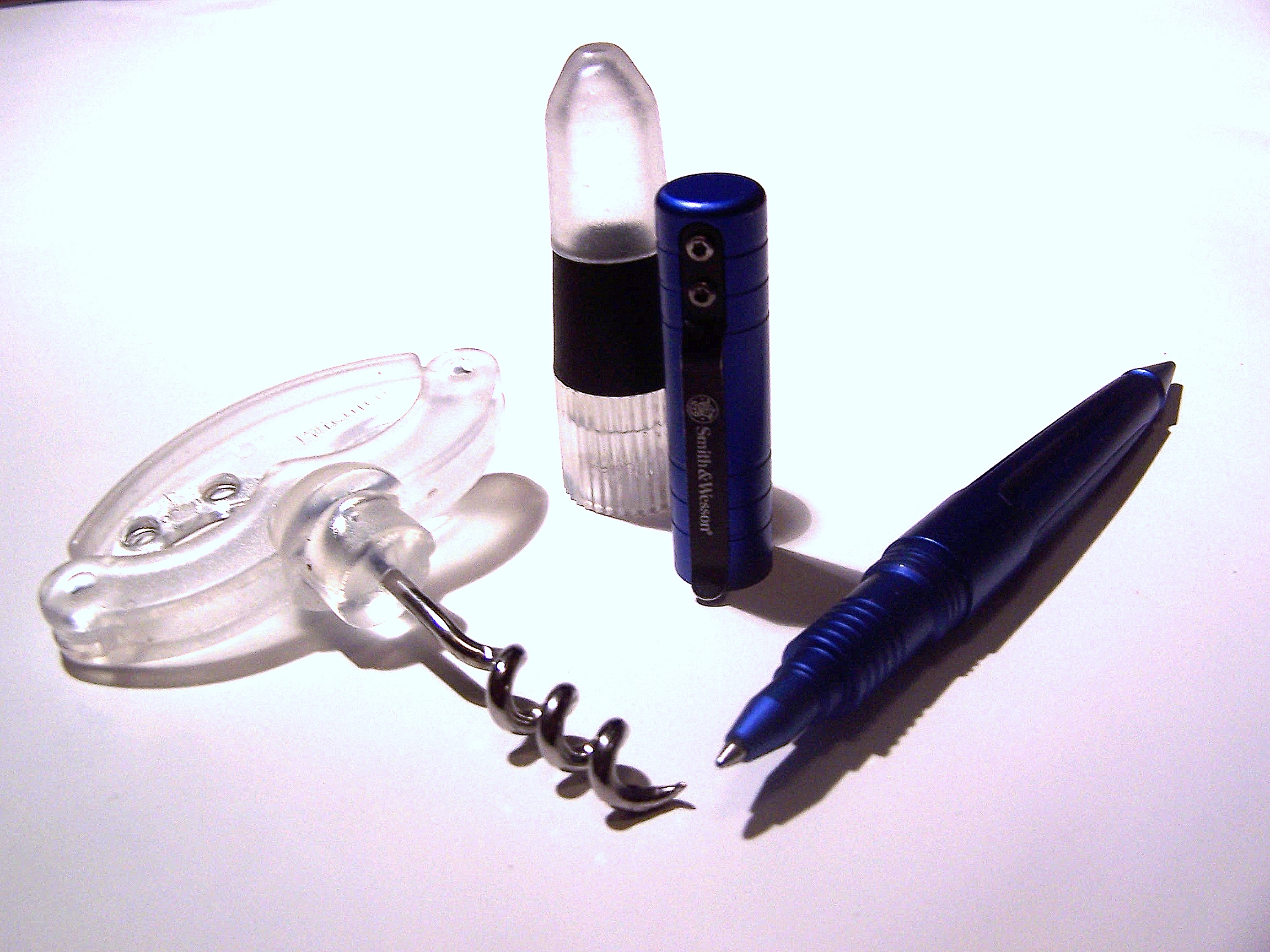 The first thing to note about this photo is that I tend to associate with a certain wine fanatic who seems to end up trapped in random hotel rooms with bottles of Irelandés, plastic cups and NO CORKSCREW.  On a late night adventure we discovered this marvelous little corkscrew that fits nicely in my purse.  It could also double as a pretty violent weapon if necessary.  It has a nice stabbing handle on it.  The pen does the same double duty; anodized aluminum with a pointy tip.  It really is just a pen, but I wouldn’t recommend trying to bring it on an airplane.

Flashlight
Don’t leave home without one.  Having a reliable flashlight is really important.  As someone who has worked in the back country, an insurance company and a gun range (among other things) I have never found myself

in a profession that didn’t require use of a flashlight at least once a month.  It’s just one of those things.  Not to mention when I lose my earring or bracelet it’s very nice to have a dark floor covered with Surefire lumens until my piece of shiny is safely returned. 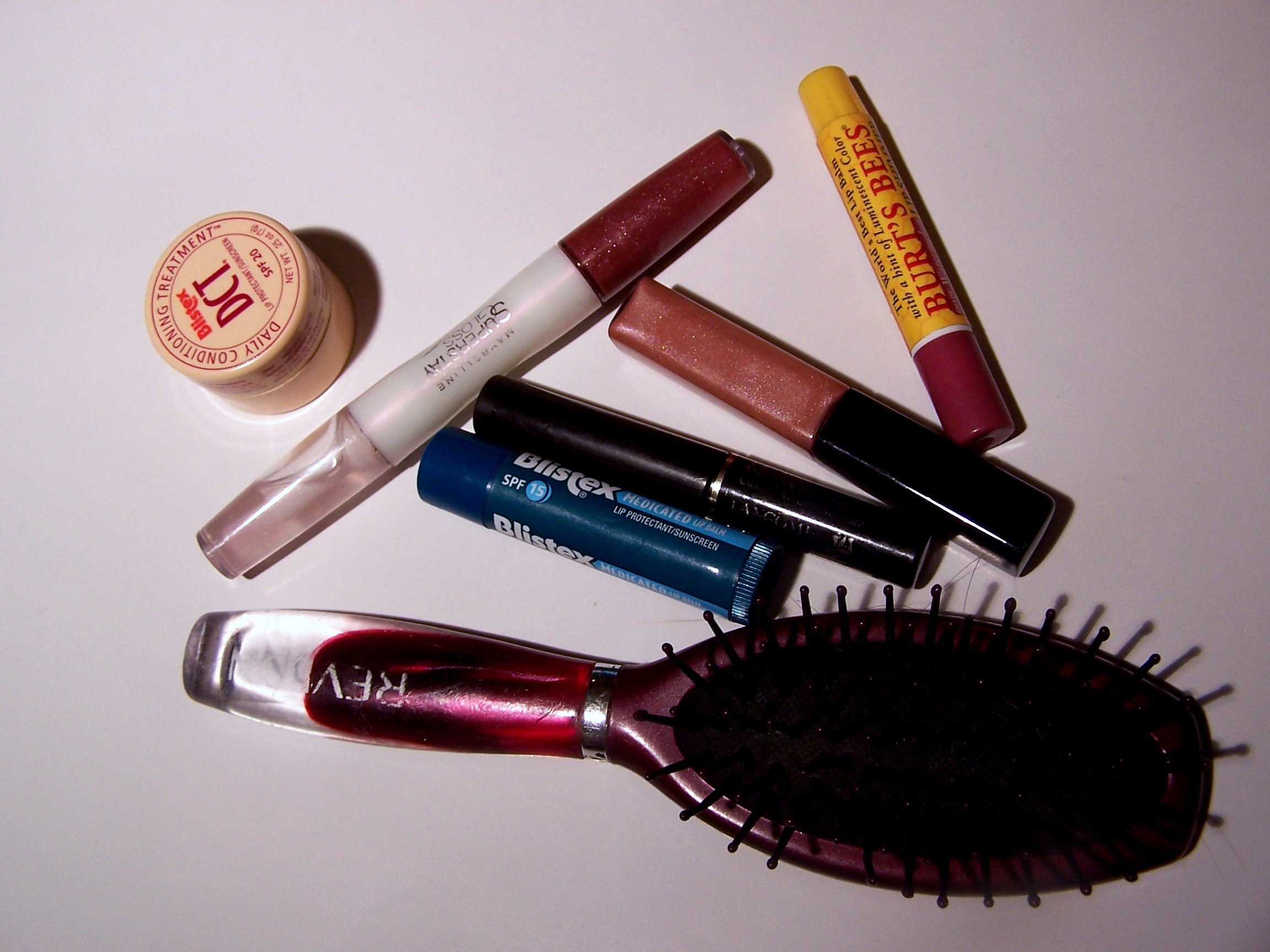 I take pride in my appearance, so keeping things like chapstick, lipgloss and a hairbrush is important.  I’m sure no one is complaining. 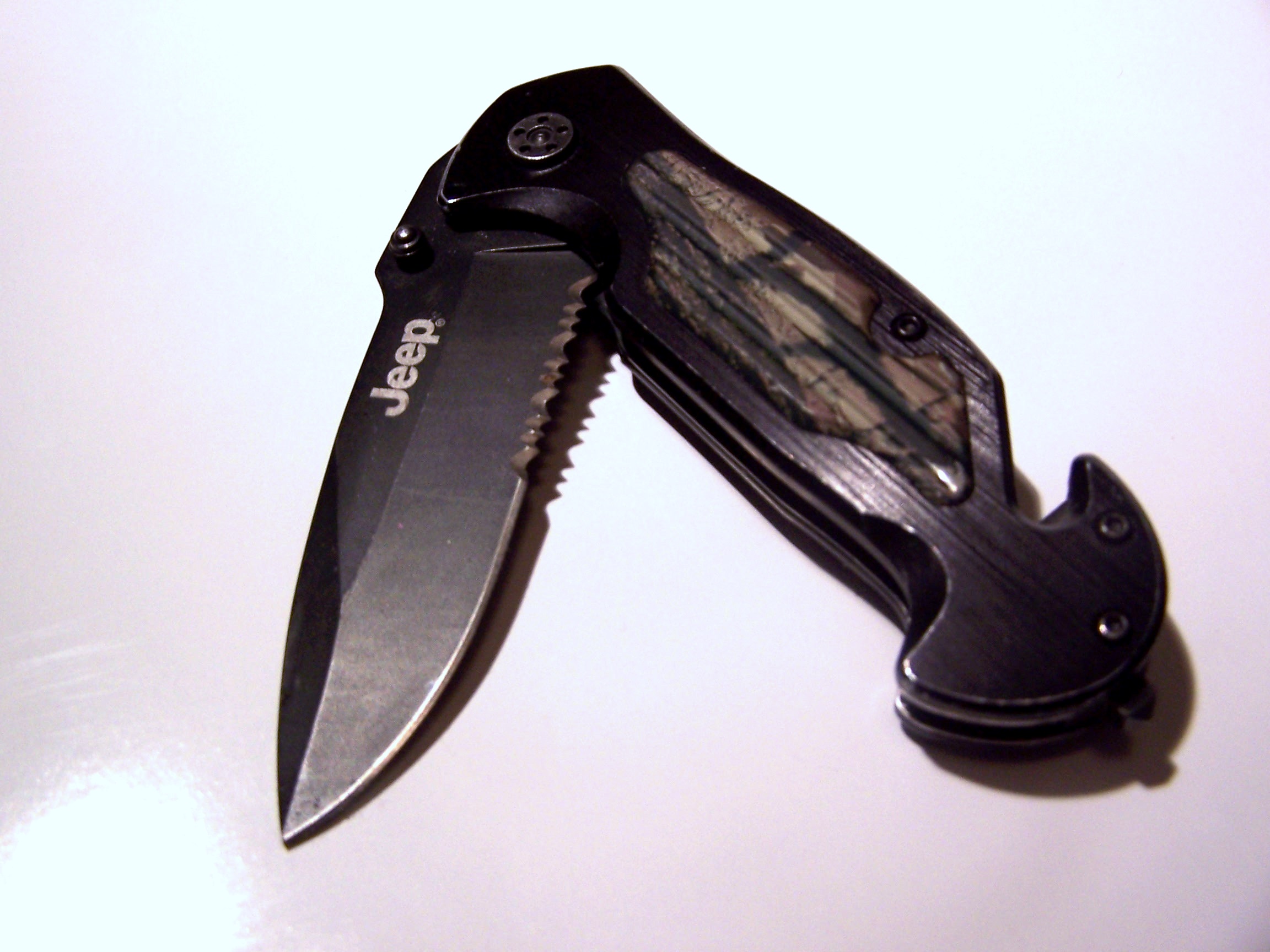 Sharp objects are useful for opening things and cutting strings and cleaning finger nails and stuff.  This particular one is my beloved Jeep brand knife.  It has a seatbelt cutter and a window-breaker-knob-thing.  It’s perfect for the day when I’m finally stupid enough to figure two wheels is plenty enough to get to the pretty lake at the top of the hill and flip my Jeep on its side.

Lotion
I have contact dermatitis.  My hands don’t like steel.  In my line of work that really sucks.  I SWEAR by O’Keeffe’s.  A large container will last me about 3 months.
Even if you don’t have skin problems, having a bit of lotion around never hurt anybody.  I know it’s a really girly thing to say, but let’s face it, guys want touchably soft skin too.

So, there are always random items in my purse.  Like a cap gun, a hex screw that was pulled out of my tire and 3 rounds of ammo.  Two have a story and the others are just random bits of ammo that have snuck away on league nights or, you know, any other day of the week.  Those damned bullet gremlins. 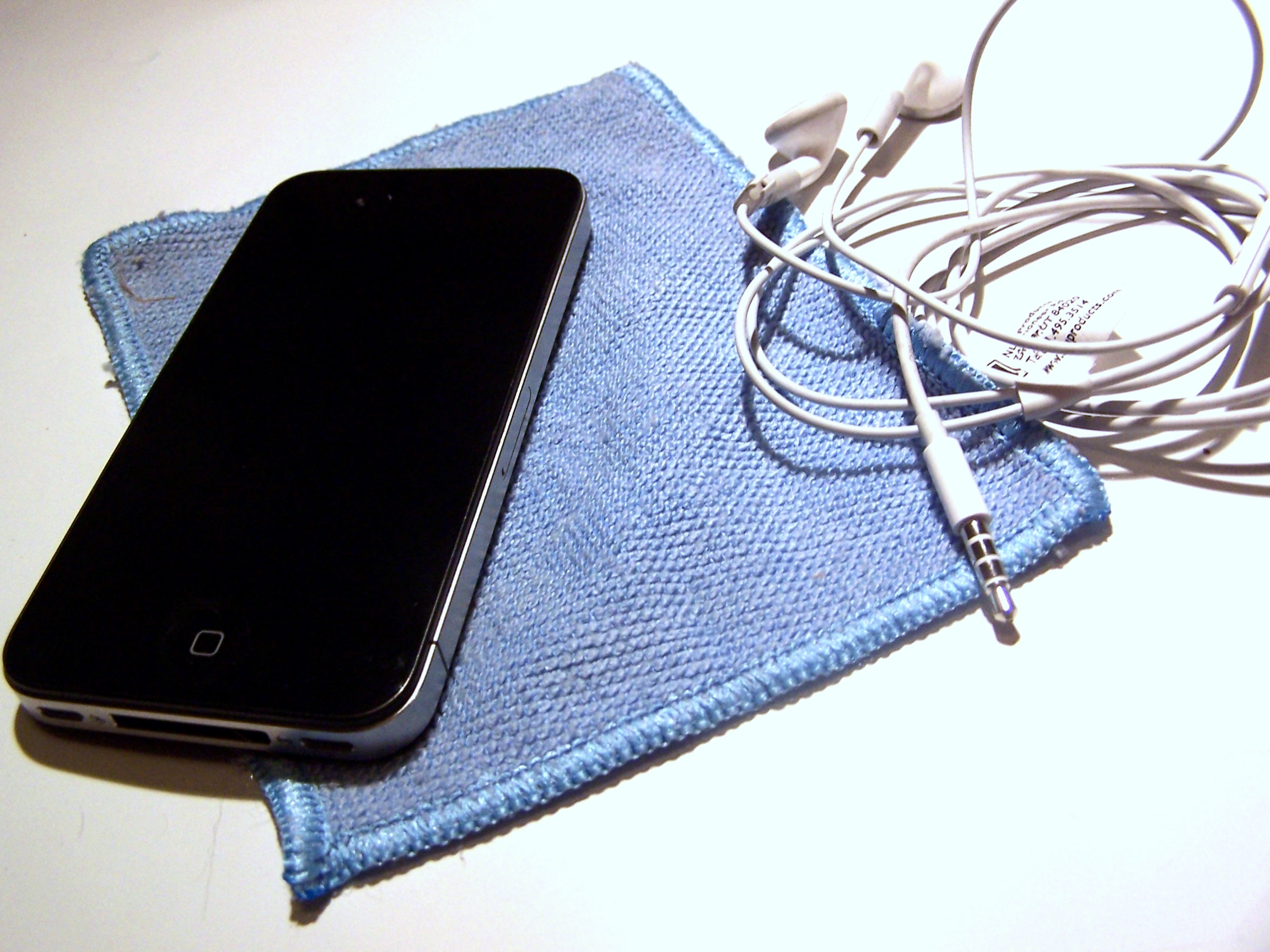 The iPhone: You can live without one?
My iPhone is my lifeline.  Best.  Purchase.  Ever.
The earbuds are part of the package.  Gun cleaning becomes a much less mundane task when significant amounts of Frank Sinatra are applied.
The microfiber cloth is something I’d like to point out.  This is a handy little tool that is good for a LOT of things: from dusting dashboards to cleaning sunglasses and iPhones.  I can’t tell you the number of times I’ve been handed a pair of sunglasses to clean just because everyone knows I’m the only one smart enough to carry one of these around. (Or does that make me the stupid one for putting myself in a position to clean others’ sunglasses?) 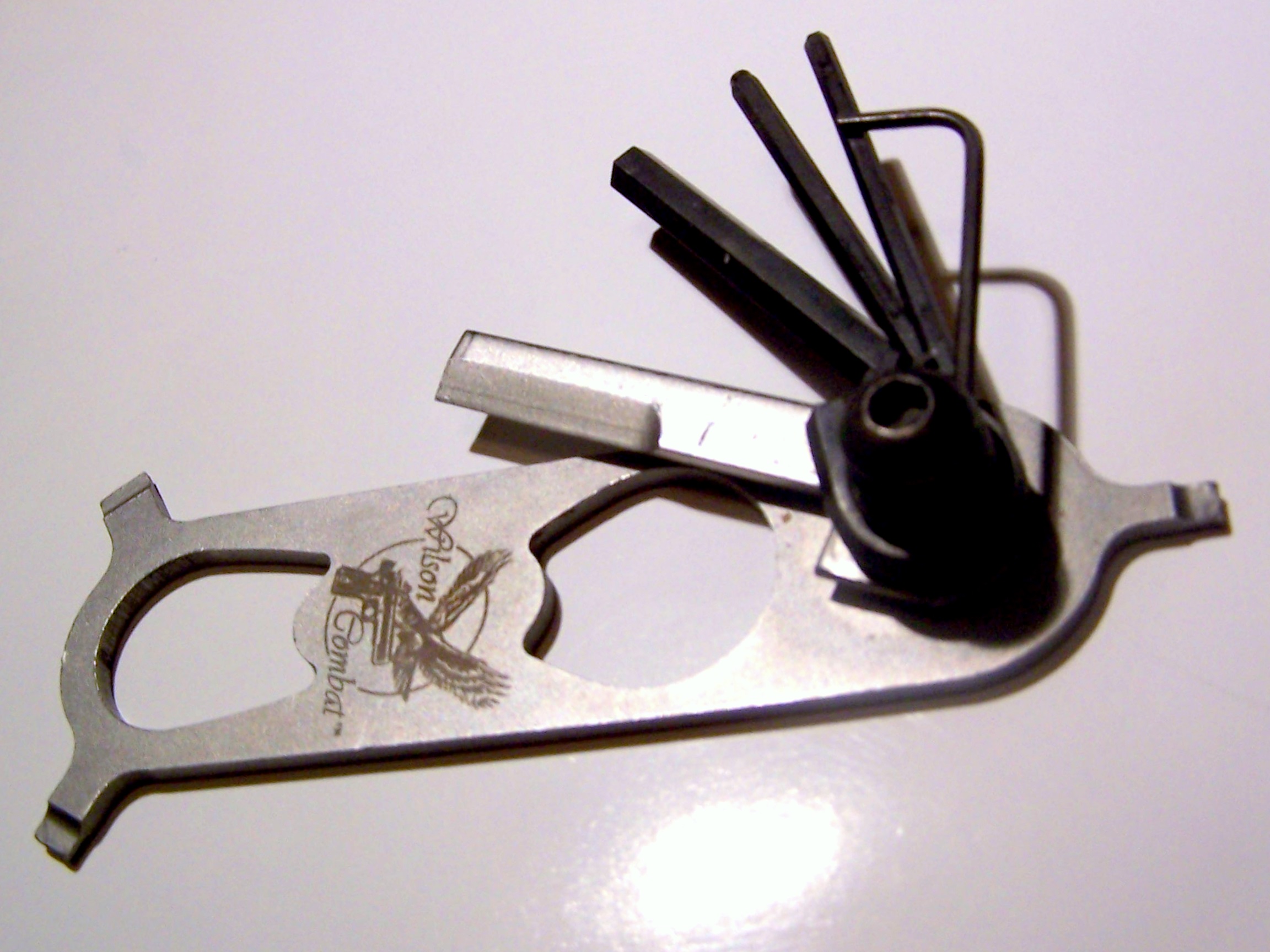 You can’t buy these anymore, which sucks because these things are amazing.  Allen wrenches, screw drivers, bushing wrenches…  How I survived 22 years without one is a mystery.  It comes everywhere with me, though tends to be most used on the range.  Usually hand in hand with a Gerber Suspension that was sadly unavailable for photographing today.

The point of all the junk we carry isn’t to weigh us down, but rather everything in here has a specific purpose and use.  Sure, I can be a bit of a pack-rat with the things that end up in my purse, but just like my carry I’d rather have it and not need it than need it and not have it.