I’ve mentioned repeatedly over the past couple of weeks that I’ve been really trying hard to work on my press out.  In response, I’ve had people ask me what exactly I’m talking about when I say “press out”, because it’s a term that’s not well defined in some shooting circles.  Todd Green (who was the first person that I read regularly to use the term) has a great post up explaining what the press-out is.  To steal an explanation:

The main points are that the front sight moves fairly straight along the eye-target line, and the shot breaks as the gun stops moving at full extension. By doing three things at once (extending, aiming, pressing) instead of sequentially, you can save a surprising amount of time.

I honestly only discovered the press-out recently.  I used to throw the gun out to full extension and then try and find the sights then press the trigger, which resulted in me hitting a hard wall of speed around a 1.5 second draw.  No matter what, I couldn’t get faster than that by doing those three actions sequentially.  By doing them at the same time though I can regularly cut that draw stroke down to the 1.10-1.25 number, which in terms of competition shooting is a tremendous improvement. 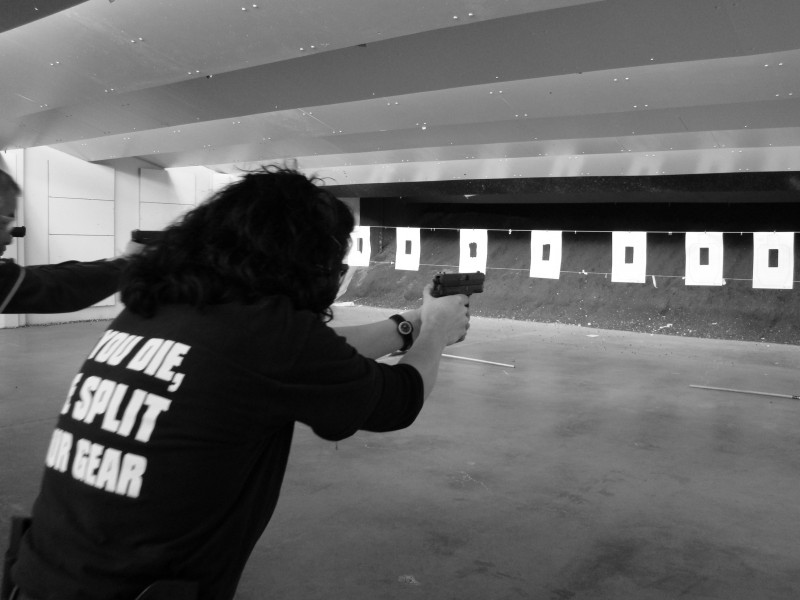 The point of the proper press-out is that the combination of all three actions is faster and creates a simpler process of getting the first shot off.  Instead of “draw, aim, shoot” as separate actions, you get one continuous process that results in the gun going bang at the same time everything else comes together.

In the recent Insights Training Center Intensive Handgun Skills class the lead instructor John Holschen spent a tremendous amount of time on the press out drill.  A proper press-out creates speed; and if you watch top level competition shooters (or even me on my awesome days) you can see that the first shot will often break before the arms are extended and the follow-up shot hits just as the arms reach full extension.

So what’s the secret to a good press out?  There really isn’t one other than practice, but if I had to pick one area to focus on then it would be to break your draw into two completely different speeds.  When your hands are empty and you’re going for the gun, go a jillion miles per hour.  Go as fast as your body will move.  But when you hit the gun and you’re started to extend it out for your press out, go as fast as you can see the sights.  It’s difficult.  Changing speeds from warp 9 to whatever speed you need to get your hit will feel weird.  It still feels weird for me in practice when I’m doing it, but it also works.  At the class, we did a drill, just a single shot to an A-zone at 7 yards.  I said to myself “I’m going to do a perfect press out and not worry about the time”.  So I did, broke the shot and it felt slow.  I was waiting for John to tell me my time was a 1.8 or something, but then he said “1.3”.

Watch the videos of the press out at Todd’s youtube channel.  If you can learn by watching, I suggest trying this in dry fire practice with a light switch or small object as the target.  Once you feel comfortable dry, go live at the range.  I honestly believe that you can’t over emphasize the amount of work you do on your press out, and improving your skill there will make you better at any discipline whether it’s Steel Challenge, USPSA, IDPA, or Bianchi Cup.