One of my Facebook friends recently picked up a Smith & Wesson 686SSR, which is part of S&W’s Pro Series line of revolvers.  I am a huge fan of this revolver, and I’ve actually been spending a bit of time with mine in preparation for the Stock Service Revolver part of the Quest for Master Class.  In its factory configuration, the 686 SSR is pretty good, but a little bit of attention from a gunsmith and some new parts make it great. 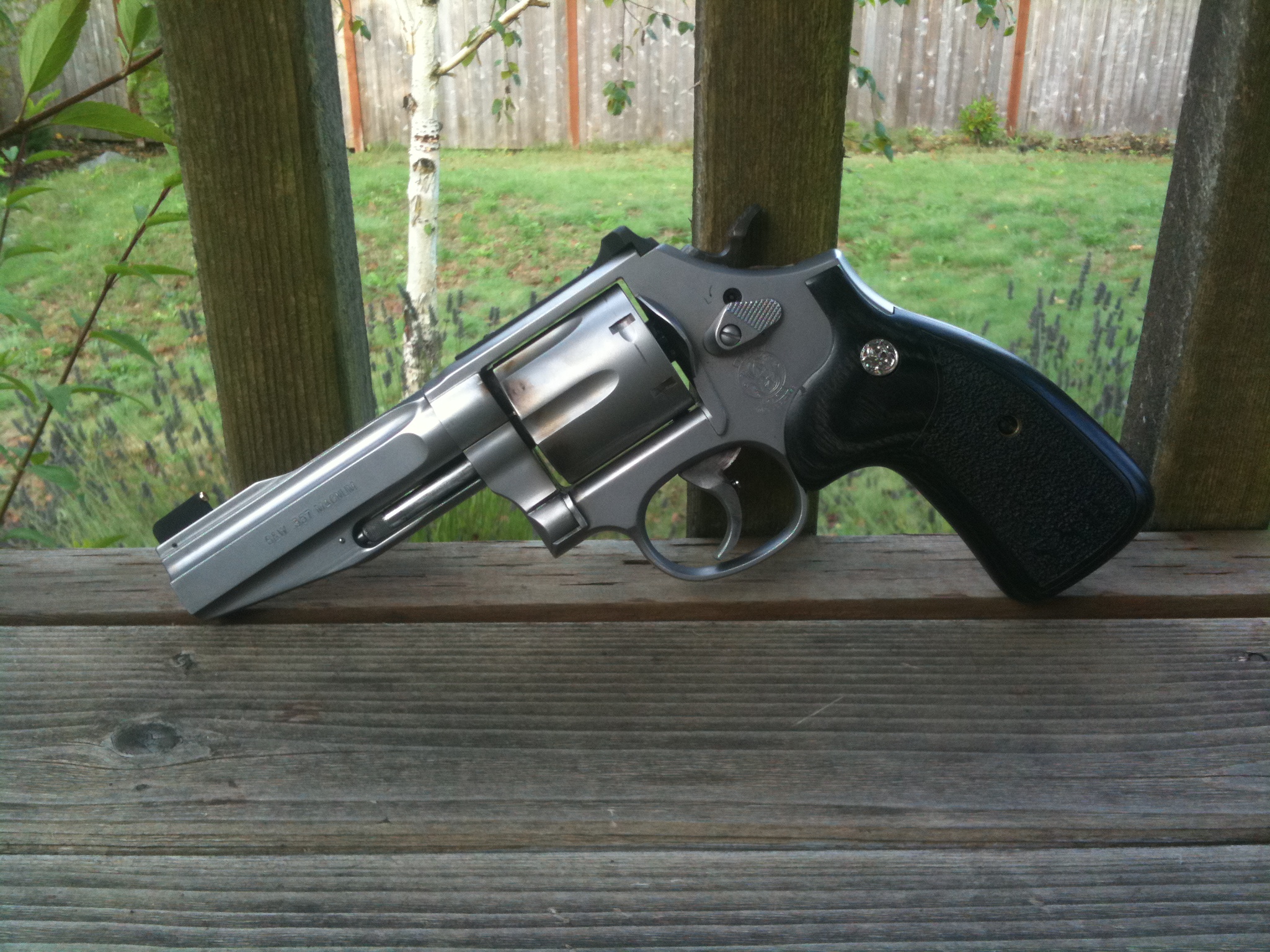 That’s my personal 686 SSR at the right; since the first time I took a picture of it in a similar pose, it has undergone some upgrades.

First thing that went was the single action notch off the hammer.  I had to retain the hammer spur itself, because I intend to shoot this in Bianchi Cup Production Division, so the modification was purely internal.  This gun is now how DA revolvers were intended to be…double action only.

An action job on a revolver is more than just lightening the trigger though.  The 686 SSR has the advantage of having a forged trigger and hammer, which (apparently) are better to work on than MIM parts.  Also, the action job polishes up the bearing surfaces and cleans up any odd kinks – for example, the hand would drag just a little bit on the star of my gun creating an odd hitch in the trigger.  That’s gone now.

Obviously as I mentioned yesterday, I changed the sights.  Gone is the orange ramped front sight and the narrow notched rear, in their place I have an SDM gold bead and a Cylinder and Slide Extreme Duty rear sight.  The C&S rear is pretty awesome; it’s a fast competition or combat sight.  The only downside (as I discovered last night) is that it’s regulated for 158 grain bullets, which means that my preferred load of a 125 grain bullet at 1050 or 1100 FPS means the gun shoots about 6 inches low at 20 yards.  That’s actually not as big a problem as you might think, because I know where the gun shoots at 5, 7, 10, 15, and 20 yards.  We’ll see how it plays out in competition though; if I end up really not liking it I’ll switch the rear to a Bowen Rough Country adjustable like I have on my 625. 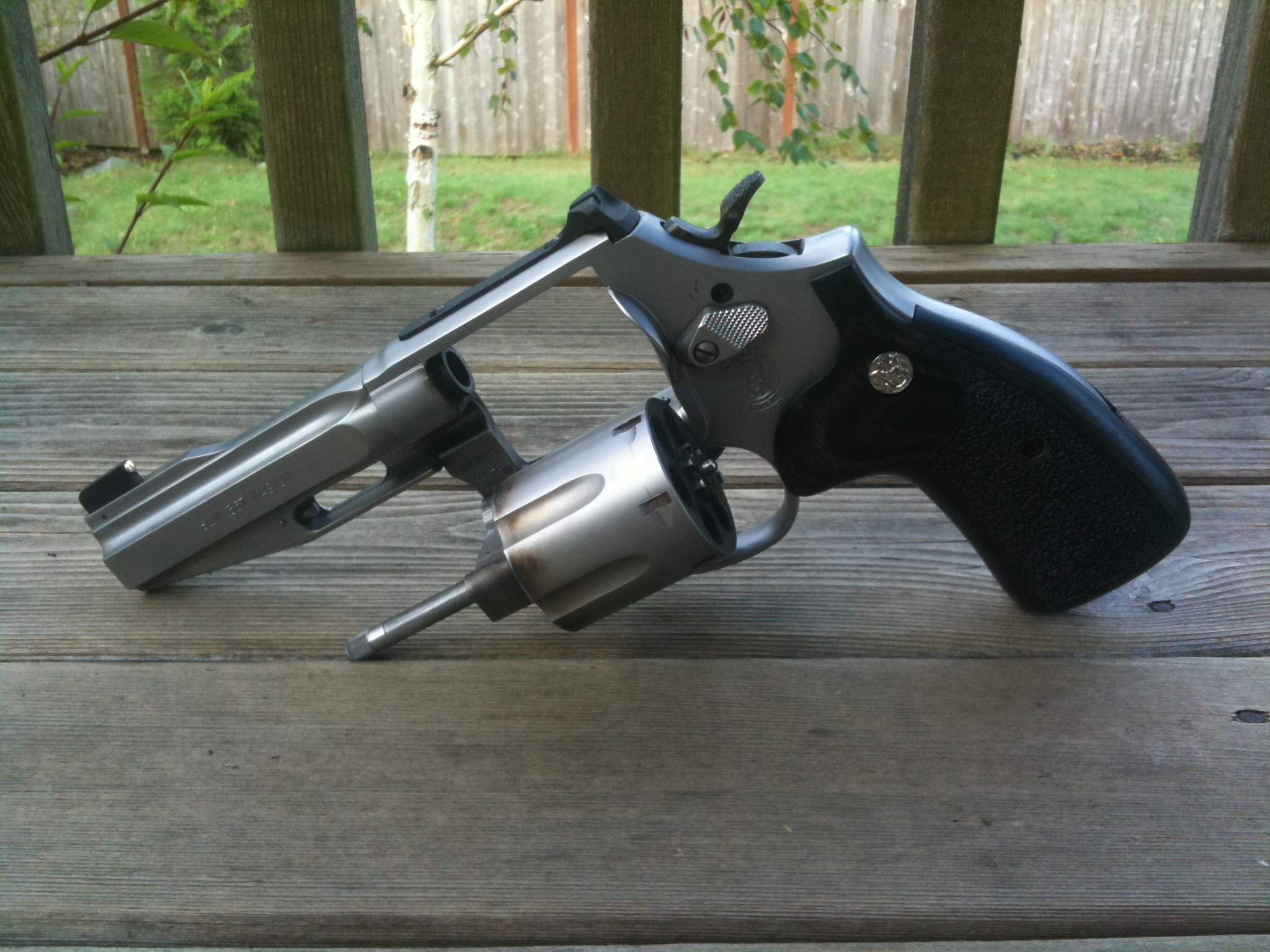 For someone looking to get started in revolver shooting, this is a hard gun to beat.  It’s got enough goodies thrown in from the factory that you can shoot it stock and have a blast, or you can spend a couple of extra bucks and really have it tuned up.  For IDPA Stock Service Revolver, ICORE Retro, or even USPSA if you don’t mind scoring minor (which I have some thoughts on) you really wouldn’t be doing yourself a disservice by purchasing one of these.  Or two.  Or six.  Plus, the benefit of the L-frame is that with a good holster, you can even carry this gun, although it helps if you’re a bigger dude.  It’s a little large for my 5’6 frame, but not completely unmanageable.