Safariland makes several flavor of speedloaders for revolvers, ranging from the smallest Comp-1 loader all the way to the “competition” oriented Comp-III loader.  The reason “competition” is in air quotes is because people say that the Comp-III is “too large” for concealed carry.  I don’t get that, and here’s why. 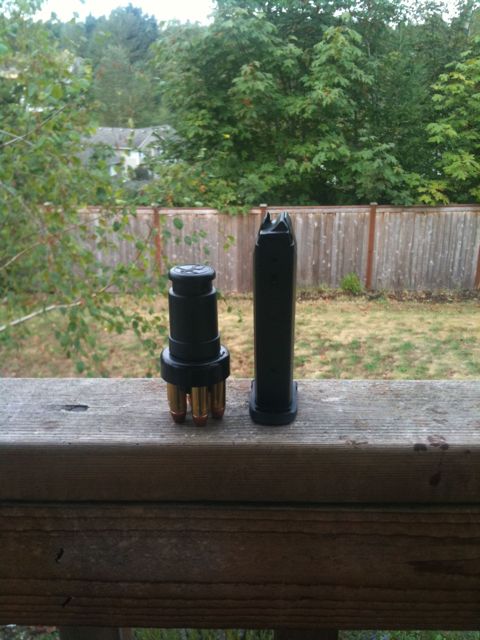 On the left you have a Safariland Comp-III loaded with 6 rounds of Black Hills 125 grain +P JHPs.  On the right, a 17 round magazine for a Ruger SR9.  The Ruger mag is about the same size as pretty much any other pistol mag on the market, and it is much taller than the Comp-III.  The speedloader is a little bit wider than the pistol magazine, however not so much so that it magically becomes “too large” for concealed carry.  I would imagine that if I had a Glock 21 magazine for comparison, it would be as large or larger than the speedloader in every dimension.

Now, admittedly I would have to carry 2 extra speedloaders to have the same ammo on my person as a guy carrying a Glock 17 who had no spare magazines, but that’s not the point.  The point is that saying that the Comp-III is “too large” for concealed carry just doesn’t make sense.

Now, there are arguments against the Comp-III for concealed carry, such as if you carry it in your pocket with other items, the chance of something getting in the speedloader and causing it to dump the rounds in your pocket is decent enough that I’ve had it happen.  Obviously, the solution for that is to carry in a speedloader pouch or in a pocket that has nothing in it but the speedloader.  The other option as I’ve discussed before is to use HKS speedloaders for concealed carry, which I do.  The “twist” knob on the speedloader is less likely to let go in my pocket, and while it gives up some time to the Safariland loaders, I’m willing to make that trade in J-frames and small guns.

But there isn’t any logical reason that the Comp-III is too big for concealed carry.  It’s smaller than most pistol mags, and is lightweight and easily utilized.  Why wouldn’t you want to carry the most efficient tool for the job?